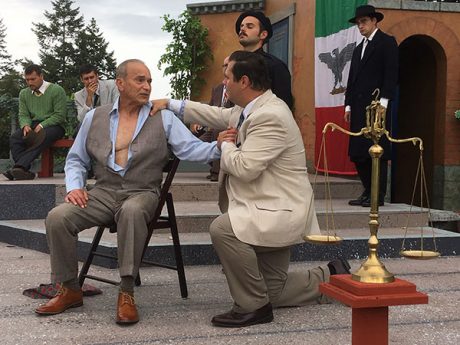 Reviews from the first week

BRAVO! A superb and deeply thought-provoking production. Not to be missed! ~ Shapiro

It was so well played and so intriguing that I want to see it again! Daniel Mayes is fantastic! Best performance ever! We have been talking about it and processing it since Sunday. This is no ordinary play! ~ Roemers-Kleven

GREAT show on Friday night. My brother and his wife were so impressed — as were Stan and I! Thanks for the garden picnic space. ~ Mathews

I love what they bring to the island. So lucky! ~ Anderson

This is a RAVE for Helen Machin-Smith and the cast of Island Stage Left’s production of Shakespeare’s “The Merchant of Venice” The opening night performance was in keeping with Stage Left’s deserved reputation of wonderfully acted, tightly directed and cleverly set plays. It’s a complex play and a very human one. Shakespeare’s story isn’t innately anything; he wrote a story equally ambiguous and sympathetic, leaving room for many interpretations. It’s funny when it should be and utterly devastating when it needs to be. Machin-Smith’s sensitive direction emphasizes the emotional impact of the story of revenge, betrayal and religious intolerance. Helen’s directorial decisions leave the audience with much to think and perhaps argue about – go see it, think about it, discuss it. I found it thought provoking, disquieting and much more than mere entertainment. Well done, Stage Left!

I love a play that leaves me thinking. ~ Mazzarella

Put this on your calendar for thought-provoking theatre! ~ Haskew 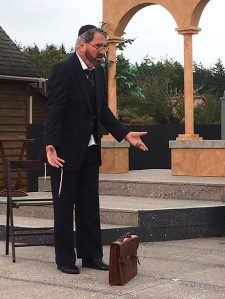 A strong cast of professional actors from across the US join Dan in Stage Left’s twenty first Shakespeare production.

The Jewish moneylender Shylock has been spat upon, curse, beaten, robbed – and his chief persecutor is suddenly in his power. Shylock demands a savage revenge. But is it justice?

“The Merchant of Venice” is a play for today’s world. The powerful forces driving it could be drawn from the daily news – including the cross-dressing heroine’s brilliant yet merciless legal gambit.

Music is interlaced with Shakespeare’s words, providing a rich background for this battle of the soul.

We are so looking forward to seeing you and sharing this remarkable play with you under the stars!

See what audiences are saying: