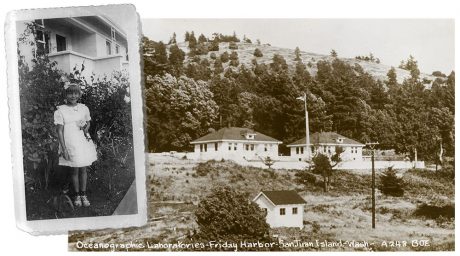 In this Centennial year for the Lime Kiln Point Lighthouse, let’s fast forward from its opening in 1919 to October of 1935.

The three bedroom house was quite cozy, as they say, with wife Helga, five children (Jack, Evelyn, Eleanor, Charles, Agnes) and Helga’s mother, Hilma Lindquist. Also pictured here is Agnes Settles in the rose garden at the front of the house.

Born at the Westport light station in 1931, she is our Lighthouse Keeper’s Daughter. Her sisters and other daughters of lighthouse keepers can rightfully claim the title as well, but it’s this photo we have of Agnes in the roses that helps tell the story of this special place.

Helga Settles recalled that the roses, planted by a previous resident, were still blooming the October day she and her family arrived for what was to be a seven year assignment until Arvel retired from the Lighthouse Service in 1942. During their time at Lime Kiln Point, Arvel paid his children ten cents to wind up the weights that kept the lens revolving for the lighthouse lantern. (There was also an assistant lighthouse keeper, with an alternate 12-hour shift, seven days a week.)

Helga tended a large vegetable garden and cooked on a woodstove. The Settles’ home was illuminated at night with oil lamps as electricity from the mainland did not come to the light station until 1951. Since we can see a power pole in the lower right corner of the photo, we can date this image of the houses to the early 1950s.

Something else we can see in this vintage photo is that it was originally mislabeled as “Oceanographic Laboratories – Friday Harbor.” Indeed, it is not. The digitized image of this photo is correctly labeled in the archival image collection of the San Juan Historical Society and Museum. We are grateful for research volunteers who are important keepers of history – the accurate kind.

After 1942 the Settles family lived in town, Agnes graduated from Friday Harbor High School in the Class of 1950, married Norman Murray, and raised five children on the island. Agnes shared her fond memories of a seaside childhood at the lighthouse with family and friends all her life. Another lovely photograph of Agnes may be seen in her 2015 obituary in the San Juan Journal here. We thank the Murray family for sharing photographs and memories so dear to Agnes’ heart.