New Baby in J Pod is a Female 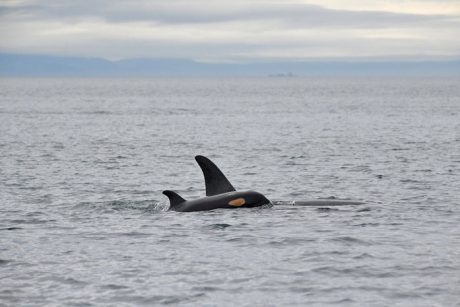 On the morning of July 5th 2019, J and K pods of the Southern Resident Killer Whale (SRKW) population finally made an appearance in inland waters off San Juan Island for the first time in more than two months.

A large crowd of people awaited their arrival at Lime Kiln State Park to get a glimpse of the new baby whale that was first reported on the British Columbia coast near Tofino on May 30th by a local whale watch company.

Brian Gisborne, a research contractor with Environment Canada, obtained photographs the next day showing that the baby still had fetal fold creases on its side, indicating that it was probably born less than a week earlier. The new baby whale was photographed again by the Tofino based whale watchers on June 9th.

We had had numerous reports from colleagues with Environment Canada and others of the SRKW pods feeding along the coast of British Columbia in May and June this year during a time when they historically frequented interior waters of the Salish Sea to feed on the early summer runs of Chinook salmon bound for the Fraser River. The salmon runs to the Fraser River have been very poor in recent years, so the whales must feed in coastal waters to survive.

Near Pile Point, San Juan Island, the new mother J31 swam around in circles with her new calf and three other young females – it looked for very much like they were showing off this new addition to the population. In a very brief moment, the baby popped to the surface with its underside exposed, revealing it was a female! This is a very welcome addition to this endangered population of whales that has experienced so much bad news recently with whales appearing skinny and passing away. We can say which whales are missing after we encounter the entire SRKW population later this summer – we hope.

The new baby whale is designated J56, probably born May 24th 2019, female, and its mother is J31, a 24-year-old whose most recent birthing in January 2016 was unsuccessful. She has had no other known pregnancies in the past ten years.