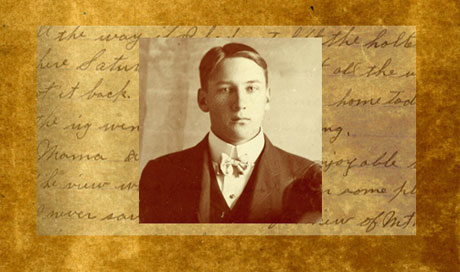 It is August on San Juan Island. The roads are dusty and the traffic is wild. This time of year dodging mopeds and navigating around long lines of bicycling tourists can fray an islander’s nerves. If you are tempted however to think about how peaceful it must have been during earlier times, I’d like to share a short excerpt from the journal that Frank Mullis kept in 1905 when he was 18 years old.

August 13, 1905: After dinner I rode out to Wilson’s on a bicycle to see Will Strahl. I had a very pleasant time and started home about 4 o’clock. The roads were and are very dusty.

On the way I met a band of sheep and when they saw me coming they ran down the road ahead of me kicking up such a cloud of dust that I could not see a foot ahead of me sometimes, so I rode slow thinking that I would let them get ahead and then they stopped so then I road fast and tried to pass them and they didn’t want to be passed.

I ran them for about half a mile as fast as I could, considering the fact that the dust was so thick that I could only see about 1/3 of the time, and then they ran into an open field.

I got home about 4:45  just as Papa and Uncle got back from their walk.

The next time you get behind a moped or a gaggle of bicyclists on the road, remember Frank and the sheep. Drive carefully and courteously and remember that time passes quickly and before we know it September will be here.

If you are interested in reading further excerpts from Frank Mullis’s 1905 journal here is another excerpt published previously on the San Juan Update: