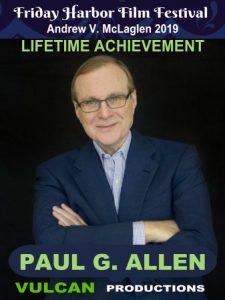 Friday Harbor Film Festival is proud and excited to announce that the Andrew V. McLaglen Lifetime Achievement Award will be presented posthumously to Paul G. Allen for his outstanding contributions to the art of documentary filmmaking, television, and media.

The award presentation, to be held during the Festival’s Opening Night Gala on October 25 at San Juan Community Theatre, will honor Allen’s legacy by screening Vulcan Productions’ tribute reel entitled A Tribute to Paul G. Allen’s Contributions in Film, TV and Media.

Allen made significant contributions to filmmaking through his company, Vulcan Productions, providing critical support to filmmakers working to make the world a better place by telling important stories. Without the support of people like Allen, documentary filmmakers struggle to find the funds to get their stories told. Vulcan’s message aligns with the mission of the Festival: Entertaining, inspiring, and enlightening audience members so they create positive changes in the world.

Allen was known world-wide as a businessman, investor, researcher, humanitarian, and philanthropist. As the co-founder of Microsoft, he helped start the microcomputer revolution. He also founded a variety of organizations to support medical research, education, wildlife and environmental conservation, the arts, healthcare, community services, artificial intelligence, and spaceflight. In addition, he owned two professional sports teams – the Seattle Seahawks and the Portland Trail Blazers – and was co-owner of the Seattle Sounders. He authored a memoir in 2011 entitled Idea Man.

The Lifetime Achievement Award honors a person who has made outstanding contributions to raising the general public’s awareness of important issues, either through his/her activism or as a filmmaker.  It is presented in memory of Andrew V. McLaglen, a proficient, award-winning Hollywood film director and long-time resident of San Juan Island.

The 2019 Friday Harbor Film Festival program is available at the FHFF office (10 First St., Friday Harbor) and on the Washington State ferries.

Please support the Festival by buying a FHFF Patron Pass ($500 + $26 processing fee) enables a tax-deductible donation of $300 to help support the Festival and provides access to all special events and a guaranteed seat for any screening, up to 10 minutes before showtime. BUY A PATRON PASS NOW