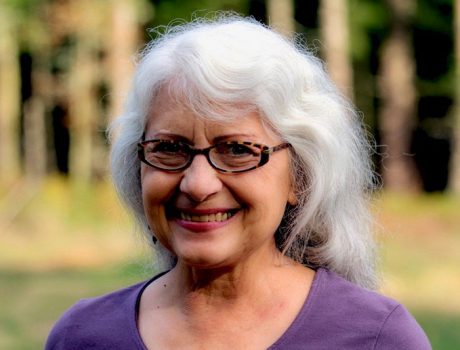 On Thursday, Aug. 29, 2019, Marie Prabha Hart of San Juan Island Passed away in Bellingham, Washington. Marie is survived by her son Ivan Reiff and his wife Jackie, grandson Brendan, and sister Evelyn Long.

Born in Philadelphia in 1943, Marie took up ballet at an early age, dancing professionally from 1972 to 1981 in New York and the San Francisco Bay Area.  She had a great love of the arts, and frequented museums and performances. Spiritual callings made themselves known early on.

During a visit to the Philadelphia Museum of Art, she came upon an exhibit that partially recreated a medieval chapel with a beautiful stained-glass window. Even though she wasn’t religious and somewhat suspicious of spiritual traditions, Marie instinctively bowed down before the window. She felt that she was in the presence of something greater than herself.

She soon started living the life of a spiritual seeker. In her 20s, she moved to California. She lived in a commune in Oregon and made her own granola long before most people even knew what that was. In Berkeley, California, she co-owned with 16 other people a locally famous house, called the Derby Dump, despite the fact that it was a beautiful old home in a nice neighborhood just off Telegraph Avenue. It was there she raised her adored son Ivan. The proceeds from selling her share enabled her to take her first trip to India, whose traditions would come to define her later life.

In the 1970s, Marie came into contact with a mystical yogic tradition and fell in love with Indian philosophy, classical Indian music, hatha yoga, meditation, and service to others; she had at last found her path. Following this “path to the heart,” she spent substantial time offering selfless service and performing yogic practices in ashrams in Oakland, California and upstate New York, where retreats and meditation programs sustained her and brought her great joy.

A stickler for detail, she meticulously taught various Indian instruments in the music department at the Oakland ashram.  One recording in particular meant much to Marie: an ancient sacred Vedic text sung by the spiritual master, Swami Muktananda. It is a calming, melodic chant, accompanied only by a stringed drone instrument providing a single tone in the background. Marie played this recording every morning.

One day, while still living her very alternative lifestyle, she asked Swami Muktananda for advice about her life; with great love, he said to her: “Get a job.” The honor of one’s duty is a central part of her spiritual path, and Marie followed her teacher’s command, holding a series of project management jobs that culminated in a position with Charles Schwab in a skyscraper in downtown San Francisco. For such a free spirit, it was at times a difficult environment, but she never stopped considering it an extension of her spiritual practice.

In 1999, she left the corporate world to become a professional hatha yoga teacher. She graduated from the three-year Advanced Studies Program at The Yoga Room, an Iyengar-style school, and spent ten years as their Program Coordinator. In 2001, the East Bay Express named hers Best Yoga Class in their ‘Best of the East Bay.’ Appreciated especially for the clarity of her verbal instructions, she helped and encouraged many new teachers through their training. Her own hatha yoga practice was described this year by another teacher as “beautiful and serene.”

In 2011, she moved to Friday Harbor on San Juan Island to live on the beautiful home-farm of her son Ivan and his family, where the cultured city girl turned country and fell in love with the chickens, ducks, and miniature goats, collecting eggs and tossing feed at the crack of dawn every day! A pacifist who would not kill an insect and who ate no meat, she nevertheless devotedly cooked meat-based cat food for her cats Devi, who was extremely long lived, and Katsuna,

Marie enjoyed many travels with her family. Including Maui and most recently Spain. She was a beloved Amma to Brendan. She was always guiding him, teaching and loving him, while being his biggest supporter in all his endeavors. She even became a soccer fan and would join the family watching big soccer games.

In Friday Harbor, she taught yoga at The Studio, a business co-owned by her daughter-in-law Jackie. She held a part-time position and board membership at the San Juan Island Food Coop, as well working and volunteering for several island organizations. Although mostly a quiet introvert, she was a fierce fighter and strongly stood up for what she saw as right.

Marie thoroughly studied Ayurvedic nutrition, which views the body as the temple of God, and her own health was excellent right up to the days before she passed away. She departed in the company of friends and her loving family, with a continuous loop of Swami Muktananda’s powerful Vedic chant playing. We will cherish our memories of her earnestness, eloquence, independence and winning smile.

Please join us to celebrate Marie’s life on Sunday, September 29th at the Brickworks 1:00 – 4:00 p.m. You are welcome to bring a vegetarian dish to share if you like. Please bring your thoughts, prayers and fondest memories of Marie to share.