The following is a message from SJCT Executive Artistic Director, Nathan Kessler-Jeffrey… 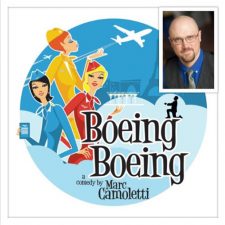 In 2008, I was in the middle of my second year of graduate school and really struggling. I had class
9am-5pm, production rehearsal 7pm-11pm, and scene rehearsal 11pm-1am. My coursework was intense, it was the beginning of the Recession, I directed three shows that year, and I was constantly exhausted. I needed a break. There was too much to simply wrap my head around and I spent every weekend catching up.

One weekend, when I wanted to be catching up, I was pulled up to Manhattan as part of a university trip. The directing class was all going to see Boeing Boeing, and I didn’t have any choice in the matter. I brought all my work with me, having an hour on the train there and back to get everything done. I’d never heard of Boeing Boeing, and I wasn’t really looking forward to it. But when I walked into the theatre lobby, there was a palpable buzz in the air.

By the end of the first scene, I had forgotten about my coursework and had a smile on my face. At the end of the second scene, I was chuckling. By the end of the play, I was laughing so hard that I hurt. I was actually sore the next morning and carried my sheer delight into the next few days of my week.

I don’t know about you, but right now I need a break. A break from my phone, a break from the news, some time to explore the silly, to delight in a great story! Fortunately, we’re about to open SJCT’s very own production of Boeing Boeing this Friday, and it is going to be a blast! There is something about the way this play is constructed: it builds from one hip Parisian bachelor, one clueless Wisconsinite, and one crazy situation into the funniest comedy I have ever been privileged to witness. The dialogue is so clever. The scenic design is superb. The characters are beautifully well-defined! (And I should know—I’m playing the clueless Wisconsinite!)

So if you need an evening of laughter, we hope you will come join us for Boeing-Boeing! We run October 4th-20th and tickets are on sale at our box office or by clicking here. It’s a great night out, and I hope we see you there.