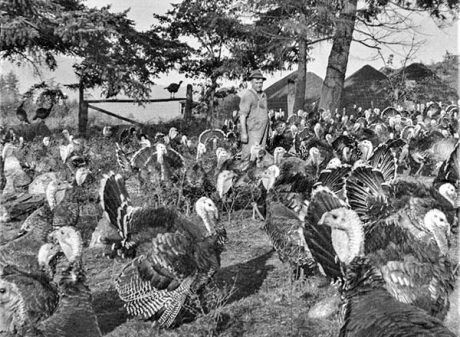 This month’s story was inspired by the smallest of items in the November 26, 1909 issue of the San Juan Islander newspaper. It was just 33 words.

“The largest turkey raised on the islands this season was on exhibition on Wednesday evening at G.A. Tulloch’s store. The turkey weighed 31 pounds dressed, and was raised on the Breedlove ranch.”

For 1909 standards, that was a really huge turkey. We sure wish we had a photograph of this particular turkey, but in searching for it we did find some interesting photos of island turkeys in the digital images collection of the San Juan Historical Society and Museum.

Here, in this undated photo, we present some Valley View Farm turkeys – too many to count – surrounding Roy Guard. Roy was born in Kansas in 1886, just a few years before he and his extended family relocated to San Juan Island.

Last month the large, multi-generational Guard family gathered at Brickworks to celebrate 130 years of being on the island. But going back to that big turkey of 1909, the small news article provided some names to research and so we did.

G.A. Tulloch’s store which displayed the gobbler was located in a couple of different locations on Spring Street over the years. Originally a general store, it evolved into featuring primarily groceries while owner Glen’s brother Ross had the other Tulloch store, better known for its hardware and housewares selection.

The prize turkey was raised on the Breedlove ranch, owned by Albert Breedlove. Archived issues of local newspapers provide a few interesting glimpses into his life on the island. Those familiar with rabbit history on the island may remember that it was Albert Breedlove who introduced several domestic rabbit breeds here in 1903. Later, in 1908, he was elected the first Master of the newly formed Friday Harbor Grange. In 1911, his young son Elmer was arrested by “Warden Guard” for hunting without a license. We don’t know what he was hunting, but that game warden was Roy Guard, pictured here with his turkeys.