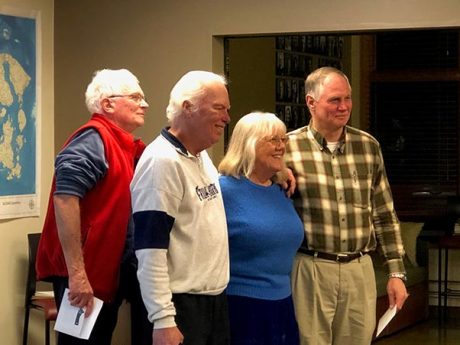 On November 26, 2019, the staff of San Juan Island EMS honored outgoing Board members with a special presentation. Outgoing Board members Mark Schwinge, Michael Edwards, Warren Appleton, and Rebecca Smith were all in attendance. Though they were also honored at the November 20th Board meeting, staff wanted a chance to personally express appreciation.

Director of Emergency Response Weyshawn Koons said, “I know there have been a lot of political issues, but at the end of the day it’s patient care that we’re all here for. I’m grateful for the work the board has done, ensuring we have the resources needed to do our jobs well.”

Warren Appleton later added, “I thank you as the father of a past patient, as a physician, and as a commissioner for your efforts as demonstrated in the work you do. I applaud each one of the 56 volunteers and staff.” Rebecca Smith echoed his sentiment, expressing appreciation for the many years she was able to serve with San Juan Island EMS both as an EMT and then later as a commissioner.

Mark Schwinge praised fellow outgoing commissioner Michael Edwards, saying “Throughout his fifteen years as commissioner, Dr. Michael Edwards worked to the benefit of EMS staff, volunteers, and first responders. Also, on many occasions he quietly dug into his own pocket to help fund community programs and activities. From the depth of my heart, thank you, Dr. Edwards, for all you have done for us.”

On November 26th when Michael Edwards addressed the assembled staff and volunteers, he summarized his feelings emotionally with the words “I just love San Juan Island EMS.”

San Juan Island EMS expresses sincere and heartfelt appreciation to each of the four outgoing commissioners. Interim Chief Karl Kuetzing said, “When the public needs us we’re there, rain or shine. The Board makes sure that as an institution we’re able to provide that response, and they protect a tradition of service to the public that is crucially important. We have confidence that those coming in to take the place of these fine men and women will do the same.”