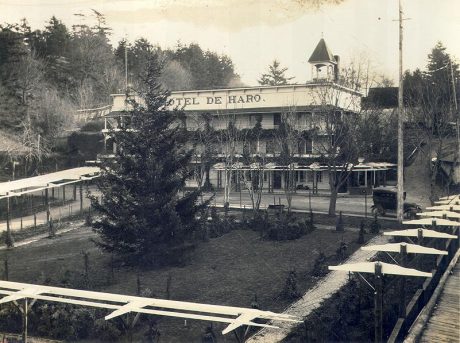 This image was labeled “Hotel de Haro Christmas 1924” when it came to the San Juan Historical Society and Museum. We know little else about it, save for what we can see here. It’s hard to miss that big tree, which we know was not native to the somewhat recently landscaped area in front of the hotel. It appears to be a coast Douglas fir (Pseudotsuga menziesii var. menziesii), but historians are not arborists so do let us know if we are mistaken as to its identity. A name for it in some Coast Salish communities is lá:yelhp.

What we do know is that this tree appears to be taller than the Hotel de Haro, with its three stories and an attic. The tree was no doubt cut down on Roche Harbor land, which totaled several hundreds of acres at the time. Note the vintage automobile (circa 1915-1920?) parked behind the utility pole near the right edge of the photo. There appears to be a light dusting of snow on the ground.

The front page of the Friday Harbor Journal dated December 18, 1924 told the story of “Islands in Grip of Howling Northeaster.” Pipes were frozen, there were chimney fires, and the mail boat was canceled for the duration of the storm. That Christmas tree in the Roche Harbor garden appears to have been tethered, but did it topple in the storm?

Gazing at this photograph through eyes focused on times past, one can imagine a large group of Roche Harbor Lime Works employees and families gathered in the garden to sing a simple song:

We wish you all a holiday season filled with joy and the sharing of island memories, new and old.