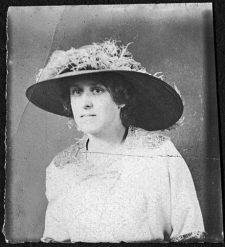 Our March history columns generally feature one or more of our community’s women, as March 8 is International Women’s Day and the entire month is known as Women’s History Month.

This year marks two significant, national level Centennials in our history where women were at the forefront: the passage of the 19th Amendment to the U.S. Constitution and the establishment of the League of Women Voters, both which occurred in 1920.

It was February 14 for the League, a nonpartisan civic organization committed to educate citizens and mobilize voter participation, and August 26 for the signing into law of the 19th Amendment which guaranteed women’s suffrage.

The road to national women’s suffrage – the right to vote – was a long one, going back to the first Women’s Rights Convention in 1848 in Seneca Falls, New York.

To put the focus on San Juan Island, we consulted the San Juan Historical Museum’s archived issues of the two local newspapers in existence during the early 1900s.

The campaign for women’s suffrage was active here locally in 1909 and 1910, during the time the Washington state legislature was considering a statewide measure. There were newspaper editorials for and against, and articles about debates. Pictured above in this circa 1910 portrait is Gladys Guard Madden (1888-1978), one of two people chosen by the District Boosters’ Club to debate in favor of “Resolved, That Women Shall Vote.” Also representing the affirmative viewpoint was Andrew Hansen. Speaking against the proposal were Josephine Tucker and Edward King. The debate took place on August 21, 1909 when Gladys was 21 years old and not yet married to Ray Madden.

Earlier in the year, the Friday Harbor High School Literary Club also presented a debate on the topic of women’s suffrage. Speaking in favor were Frances Mullis and Evelyn Culver. Speaking against it were Harold Broder and Claire Tift. Both sides seemed to be somewhat equally represented overall in island newspaper editorials and letters to the editor, although the Friday Harbor Journal leaned toward more conservative views while the San Juan Islander represented more liberal views. Ultimately, the San Juan County vote tally in the November 1910 election was 278 votes in favor of passage and 140 votes against.

Washington became the fifth state to grant women the right to vote in 1910, and it marked a national turning point for the eventual passage into law of the 19th Amendment in 1920. In this year of 2020, we celebrate its Centennial. What a long road it’s been.