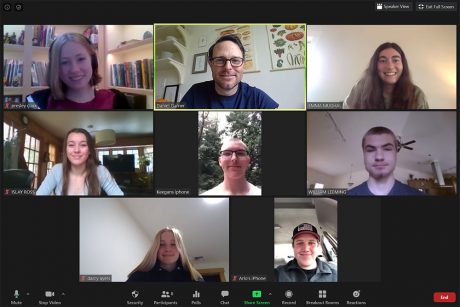 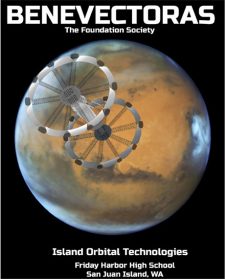 This year, the FHHS Aerospace Team (Island Orbital Technologies) has once again earned their way back to the International Space Settlement Design Competition World Finals with a top-four design proposal entry.

After putting in hundreds of hours of work on this year’s proposal (the crux during the first weeks of quarantine), this is great news. The team worked tirelessly on a ‘cycler settlement’, dubbed Benevectoras, meant to service Mars exploration. Their innovative ideas and thoroughness came through clearly in the 60-page design proposal, which ultimately scored high enough for a top-four worldwide placement. This result automatically sends the team on to the World Finals, skipping over the quarterfinal NW competition.

“I am incredibly proud of this team,” said their teacher, Dan Garner. “In any ‘normal’ year, this is a difficult feat. To switch from in-person teamwork to virtual teamwork two weeks before our proposal deadline was challenging, but the results show the great heart, determination, and superb collaboration of our Friday Harbor students. We now have another chance to win a World Championship during the World Finals held at NASA’s Kennedy Space Center in late July. Fortunately, the International Space Settlement Competition is offering the option for either live competition or synchronous, virtual competition, so either way we are looking forward to going after another title.”

“As well as all of the members of this year’s Aerospace Design and Literature class.” exclaimed Mr. Garner, “Without the whole class the team could not have made the push to the end.”

In the prior year, the 2019 team traveled to the International Space Settlement Design Competition (ISSDC) World Finals along with teams from 10 countries from around the globe to compete at NASA’s Kennedy Space Center. The FHHS team, along with their corporate teammates (Uruguay, Canada, India and central US semifinalists) were selected World Champions for 2019.