Neither Here, Nor There 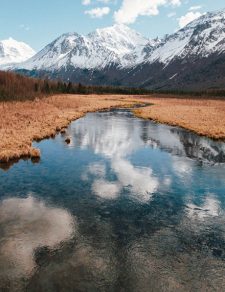 We can all use a bit more entertainment these days. Begin by conjuring up the Far North. Way up, where invisible longitudinal lines get closer, just short of an invisible Arctic Circle. Nearly all of these campfire tales take place in a particular chunk of circumpolar subarctic taiga; east-central Alaska.

The mosaic of boreal forest, alpine uplands, muskeg and dendritic water courses stretch to the horizon. These stories are true enough except for some notable characters and place names. In the human realm are the strong ebbs and flows of newcomers, boomers and fascinating traditional cultures in place for ten millennia. Life in the woods, myths and big project ideas all stir together over the last 50 years in one of the most iconic regions of “Seward’s Folly”.

Late April. This is now the season of wintry retreat in the subarctic. Mountain ranges and huge basins are melting out and countless wild rivers are breaking up. Kind of a speed-shift of seasons toward the ease and twilight magic of summer. Water undergoes an amazing physical transformation; from hard ice to vapor to running liquid, in a few intense weeks. Rivers are the highways in the bush and they can’t be safely used for weeks. The sun blazes, climbing higher overhead as each day gets longer by several minutes. The tilt of earth relentlessly breaks the grip of months of penetrating cold.

When the fabled Yukon River, 500 yards across at the Canadian Border some 1250 miles from the mouth, finally succumbs to incalculable hydrostatic pressure from beneath and ice-candling from above, it lifts and cracks into football field flows 7 feet thick. It is both spectacle and abrupt turn of the season. The lower Yukon, several miles wide, breaks up first with succeeding releases marching up the 1,800 mile river to the headwaters. At any one moment at any particular spot, it is vastly silent and steadfast, shores thawed to rock and mud, ducks winging by. In the next moment a wave of energy ripples the width of the expanse and the icy stampede downriver begins. I have seen that moment. Just once. Slowly moving at first, often stop and go. Then like a freight train at 9 mph pushed by 225,000 cubic feet per second of muddy water seeking the Bering Sea.

Until the flows break up into house-sized chunks and smaller, there is a great threat of ice jams where the river narrows. Jams are exponential power multipliers with the river rising and rising behind the dam, sometimes for jittery days, before it blows out in a spectacular flood of tumbling ice that mows flat huge forested islands and lowlands on the outside of river bends. Many historic roadhouses and cabins still in use, sometimes a long way from the river proper, are flooded or destroyed by ice blocks. With so many immense factors in play, each breakup is a unique experience up and down the river.

Talk about a stark latitudinal contrast! Working in our garden these days on San Juan Island, taking in lush green and flowers, I thought of my friend, Archie, once again emerging from his hibernation. Probably puttering around his moldering cabin compound, perched on a sinuous slough at the edge of a small Yukon River village. Rearranging tarps, chipping out the now revealed thick yellow ice by the front steps, or maybe fixing something at his cluttered shop bench.

Leaving for the north after serving in the quagmire of SE Asia, Archie is now a bit long in the tooth and strongly opinionated. Still there on the Yukon. This was a tough winter after significant warming for many years.   There, climatic weirdness is “slap you upside the head” obvious; in 3D technicolor, with Dolby surround sound, from the front row. I rang him after recent emails that due to their paragraph count and scatter-shot topics, indicated that his metamorphosis from winter hibernation was badly stalled out.

Archie’s testy attitude seemed mainly fueled by the cancellation of a rare, long-planned trip Outside for break-up. Or as he tapped out recently, “an interesting but stressful dive into the rat race of the confused masses chasin’ their tails and spendin’ good money on the newest technology to give away their privacy. Reminds me why I fled north in the turbulent 1970s, when the US population was half of today’s overshoot”.

After brief niceties, I posed a change-up question as opposed to something snarky, asking what he was most optimistic about.

He coughed into his fist to buy some time, then slowly said “fungus, women leading, legal cannabis and the return of the snow buntings”.

I was momentarily high-centered, pondering that mix.

Hearing hesitation, he threw down on me, “so anyway what’s up with the good life in the crown-jewels of Washington State? Once riding high on tourist throngs all summer. Travelers hoping to rediscover themselves by spending a wad, constantly checking their umbilical technology like proto-cyborgs, and hoping locals will provide background entertainment. Then to top it off, getting out on the water to hound resident Orcas to extinction while signing up and donating $20 to save ‘em”!

It is fair to say that Archie is naturally cynical, anti-establishment, and he views tourism as a form of flesh-eating bacteria. Years back, after reading an article in some conspiracy tabloid he had his mercury-filled molars pulled by a sketchy itinerant dentist to avoid “going nuts”. Hmmm.

Before I could mention the many good folks trying to alter the arc of that recent history here, Archie launched into a weird, spluttering tirade about how “I only wish that this little X%8*@!* virus was the size of an orange, then I would sign up to gleefully smash them into harmless goo with a bat”. You know lingering cabin fever when you hear it.

I imagined him standing on his porch; shrinking snow piles, his old pickup crowned with snow, smoking a roll-up with roof eaves dripping in the fluid tempos of late April. Like his smokes, his well-rehearsed tirades (he talks to himself constantly), are unfiltered. He also has a special ability to travel elsewhere in his mind, which he attributes to a winter of sharing his drafty, cluttered cabin with a “bossy gal” many years ago. To add insult to injury she whistled along with radio tunes. In fairness to her, I should point out that personal hygiene and willingness to adapt to someone else, are not among Archie’s strong suits. Then, there is the problem that he can make darn near anything. Except a living.

Archie does love his mostly caged pet ferrets. I have previously related the story of a regrettable evening, long ago during a “brass monkey” cold snap. Gulping his green home brew, riffing about really odd people we knew, we arrived at the brilliant notion to stage a ‘ferret down trousers’ contest. I prevailed by a few seconds and have the physical and emotional scars to prove it, so he calls me “Champ” as a reminder of my besotted victory.

I asked how the village was faring in the crisis and the level of anxiety about the gravel road being bull-dozed to allow driving to and from Fairbanks; a sprawling, polyglot portal to the rest of the viral world.

Archie scoffed “ya, well Champ, have you already forgot about spending hard-earned money for a couple hours of shouldered in with other folks, often unwashed, sometimes gassy at altitude, in a small plane winging to town”?

No, I remember that well. Landing at another village there is the shuffling of head-bent, puffy clothed passengers in and out. Some duck out for a quick smoke under the wing. There are the teens in shorts and Air Jordans shuffling in place. Cold but cool. Freight is unloaded while sub-zero air fogs on the plane’s floor. Then a very quick safety briefing while the pilot fires up, keys the radio mic, spins the plane and taxis out as folks loading the freight into snow machine sleds turn their backs to the prop blast. Then we rise out of the cold ground layers, hanging on the prop, into the brilliant sun.

He went on to say that even passenger service was restricted now. Contract mail was getting in along with the usual boxes of wilted produce, small bruised apples and piles of soda pop and pampers. “Oh ya, almost forgot, thanks for the vitamin D care package you sent up! We are all on river watch now and busy with the usual stuff.   I dragged my skiff way back and tied her up to a big poplar. We are hopin’ to see the river go out without ice jams and flooding like we hear of downriver”.

Then he achieved peak performance slurping another cup of scalding tea and found a strange metaphorical groove. Even for him. “You know why this viral spread in America is kinda like the Mongols catapulting their plague-ridden corpses over the fortified walls of Christian Caffa in 1345”?

No, tell me Archie.

“Because far beyond outright death, it spawns gnawing fear and divisiveness leading to a collapse of social order. This virus is a nasty little trigger that will expose our deeply fractured and spoiled-soft country. We are stumbling down the slippery slope of empire failure”.

I chimed in “meanwhile, the climate emergency has loomed ever larger over 30 years and laws of earthly chemistry and physics don’t rest….”.

Archie cut in snorting “and it will be a way more serious mob of threats than this pissant virus, don’t you think”?

He went on “I feel good being here, at the end of the road, where life is already simple. You know everyone. Our expectations are realistic, except for a few wingnuts and end-of-the-roaders. There you are in your easily disrupted, infinitely regulated, badly degraded paradise. We still have nature’s pantry here. Your iconic salmon have been all but destroyed as the lifeblood of your watery region. Now, bye- bye Orcas, too. Your growth-drummers have tirelessly inflated tourism without bounds. What other community-based revenues can you rely on in the post- COVID 19 world order? You are less self-reliant than we are up here. Buckle up, Champ, your taxes are going to skyrocket to keep the economic bloat afloat!

Hey, I hear the Yukon ice moving, I gotta go”.