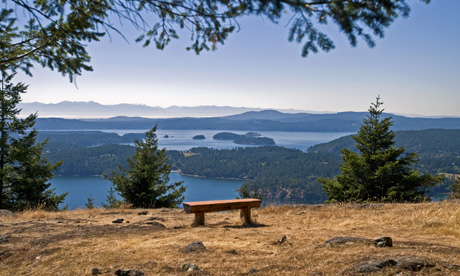 The San Juan County Land Bank and San Juan Preservation Trust today announced the acquisition and permanent conservation of a 36-acre addition to the Turtleback Mountain Preserve on Orcas Island. Concurrently, an adjacent six-acre parcel was returned to the Lummi Nation. Purchase of all 42+/- acres (total) was prompted by the vision and generosity of Malcolm Goodfellow, whose $5.2 million gift is thought to be the largest charitable cash donation in San Juan County history.

Goodfellow, an island resident, took note when a property referred to as “Haida Point” was listed for sale in April. He spent hours researching the background of the area of West Sound where the property is located. “The connection to the Turtleback Mountain Preserve was obvious, and both the Land Bank and Preservation Trust confirmed that they have long considered it of highest priority for land conservation,” Goodfellow said. “But after researching the history of the property, I came to see that it was also an important part of the ancestral homeland of the Lummi people. After talking this through with the Land Bank, Preservation Trust, and representatives of the Lummi Nation, we found a pathway to meet everyone’s objectives.”

The entire 42-acre property will be protected from development, in perpetuity, by conservation easements held by the San Juan Preservation Trust. The culturally important six-acre part of the property, including Haida Point itself, will be owned and managed by the Lummi Nation as private property (and will remain closed to the public), while the 36-acre upland portion will be added onto Turtleback Mountain Preserve, which the Land Bank owns and manages.

Goodfellow has a history of philanthropic leadership in protecting and expanding Turtleback Mountain Preserve. He helped kick-start the original $18.5 million Campaign for Turtleback in 2006, donating a $1 million lead gift that launched a torrent of grassroots support. He was also a major contributor to the Preservation Trust’s 2012 acquisition of Turtleneck, the property that connects Turtleback with Turtlehead Preserve, and he has been a longtime advocate for land stewardship in the islands. “Land acquisition is just the first step,” Goodfellow said. “Stewardship is harder because it never ends. It’s now on all of us to support the conservation organizations that will be caring for these beautiful places for generations to come.”

The 42+/- acres acquired, conveyed, and protected today create a permanent wildlife corridor that reaches from ridgetop to ocean shoreline and tidelands. Altogether,there is now a total of approximately 2,275 contiguous acres of protected lands and a natural corridor stretching between Lover’s Cove on the northwest coast of Orcas Island to West Sound on the south side.

The newly protected conservation values include rare seaside juniper and brittle prickly-pear cactus, Garry oak trees and associated coastal prairie habitat, pocket beaches that are in a Tier I protection area for forage-fish spawning habitat (a critical component of salmon recovery and a foundation of the marine food web), the only known population of western fence lizards in San Juan County, and abundant habitat for many species of birds, bats and other mammals, fish, reptiles, and marine invertebrates.

“I am honored to be a part of this historic and incredibly significant conservation project,” said Angela Anderson, Executive Director of the nonprofit San Juan Preservation Trust. “The combination of protecting the land’s remarkable conservation values and beauty, along with the opportunity to work with the Lummi Nation in restoring a sacred cultural site to its rightful owners, will always be a highlight of my career and personal experience. And it’s all thanks to Malcolm Goodfellow, who has earned a place among the most generous and far-sighted supporters of island conservation in the Preservation Trust’s 41-year history.”

“It is remarkable to have the opportunity to make significant conservation gains even now, with so much uncertainty surrounding us,” said Lincoln Bormann, Director of the San Juan County Land Bank. “We are deeply grateful to the donor and seller for remaining steadfast in their commitment to preserving the character and beauty of this place we call home.”

In addition, the Preservation Trust and Land Bank value the partnership they have established with the Lummi Nation on preservation of land. Chairman Lawrence Solomon expressed his wish to acknowledge a continued partnership with the Preservation Trust in preservation efforts. “The return of our original homeland has deep cultural, historic and spiritual significance to us,” Chairman Solomon said. “I want to acknowledge the many people who worked together with our team to make this happen, including Preservation Trust staff and board members, our friend Kevin Ranker, and of course the generosity of Malcolm Goodfellow.” The Chairman added his respect for the seller who purchased this parcel and preserved it in its natural state: “Hy’shqe.”