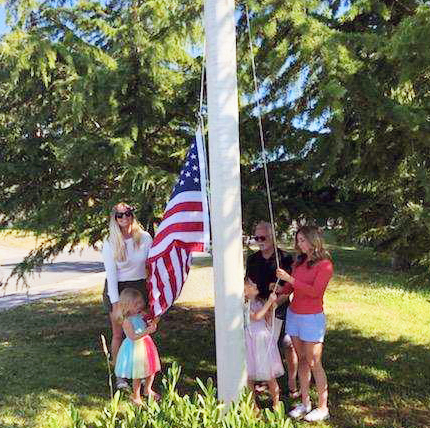 Not only has the Lackey family provided the Mullis Center with a new flag, they also generously oversaw long needed repairs to the flag pole replacing the damaged lanyard and installing a solar light at the top to illuminate the flag for 24 hour display.

“My mother, Margret Lackey, loved living in Friday Harbor and she LOVED the Senior Center.” said her daughter Marilyn (LaBar/Krabbe) Nasman.“It provided her friendships, belonging, and purpose as she diligently worked in the fundraising campaigns for the Mullis Center.“ Lackey, an active member since the days when senior lunches were served at the old Gray Top Inn at the Fairgrounds, worked tirelessly for 18 years fundraising to make the Mullis Center a reality. 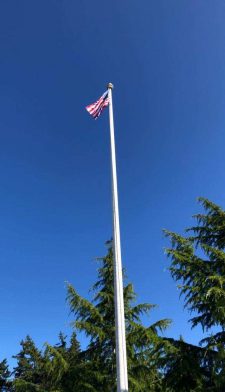 Devoutly patriotic Lackey was given the honor of hoisting the American flag over the center grounds for the first time. “Mom proudly raised the first flag on that flag pole. The first flag was given to the Center by our then representative, Jack Metcalf, it had flown over our nation’s capital.”

Hearing that plans were afoot to get the Mullis Center flag-pole back in operating order, islander Carol Marston mentioned it to other friends who supplied a new documented flag that also has flown over the nation’s capital.

In keeping with the family legacy and tradition John Lackey (Margret’s son) with his daughters Shannon Lackey of Denver, Colorado and Megan Mulhall of Sacramento, California plus Megan’s daughters Mia and June were the first to raise our beautiful new flag.

Many thanks to the Lackey family!