The Great Chicken Race Scandal of 1981

SJ Historical Museum with their History Column for August… 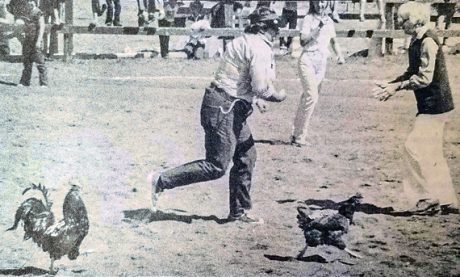 It was pretty easy to choose a topic for this month’s history column. Last month’s column suggested a theme when we came upon the fun photo from the 1981 Fourth of July Parade and decided to use it, since we didn’t have a parade this year. Deciding to stick with 1981, a simpler time, we were delighted to find a good image and a few stories from that year’s San Juan County Fair, held August 19-22. Its theme was “The Old and the New,” featuring the fair’s first ever Chicken Race.

May we present to you a flashback to the inaugural Chicken Race – which turned out to be a bit of a scandal, with feathers flying in more ways than one! Here’s how it unfolded.

A crowd gathered at the arena on Friday, the highly anticipated race day, to cheer on twenty feathered entries, managed by their 4-H handlers. Apparently, the excitement of the moment hyped-up some of the handlers, who were observed to be chasing their birds at the start of the race, thus giving them a head start. In addition, the race was won by “Man-of-War,” but the crowd cried foul since the winner happened to be owned by Leonard Knowles…who was in charge of the race. Wanting to move past the controversy and ruffled feathers, it was decided to scratch the results and run the race again on Saturday, without the Knowles chicken. There were fewer entries this time, but “Macho” the chicken, owned by Edward Leche, fairly won the blue ribbon after leaving ten chickens and two ducks behind in the dust.

We are grateful that Steve Wilhelm captured the above image for the Journal to document the Chicken Race’s first year. Do you recognize anyone in the photo? Did you have an entry in the 1981 chicken race? Please let us know at the San Juan Historical Society and Museum.