Wildflowers in Bloom at the Gravel Pit 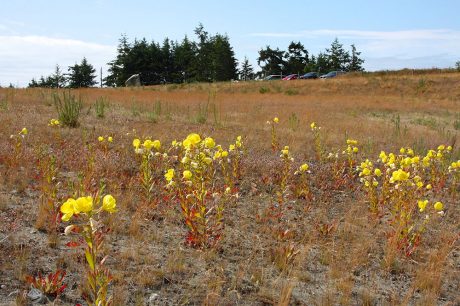 A number of people have been asking one another what those bright yellow flowers are that have appeared recently at Island Rec’s LaFarge Open Space, aka the gravel pit. So we checked with Eliza Habegger, the land steward at the Land Bank, whose responsibilities also include ecological assessment, monitoring, and restoration on Land Bank Preserves, and managing the Salish Seeds Project native plant nursery.

She responded: “Your photo looks to me like it could be Oenothera biennis, common evening primrose, an introduced species. Here’s a description http://biology.burke.washington.edu/herbarium/imagecollection/taxon.php?Taxon=Oenothera%20biennis and you can search for photos online.

“It’s a little hard to make out the pink flowers but I suspect they are Trifolium arvense, rabbit foot clover. I’ve noticed it spreading widely in the islands the past few years, particularly along roadsides and other sunny, disturbed areas. Also non-native. 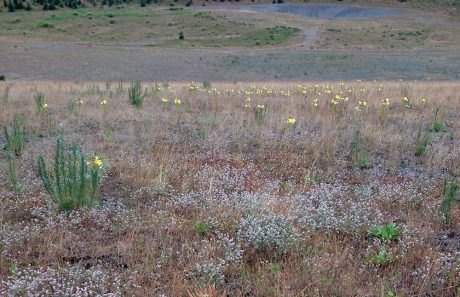 “It’s possible one or both of these were intentionally seeded at the gravel pit, or along island roadsides. The gravel pit is definitely a unique habitat – almost no soil, really warm – so it is always interesting what turns up there!”

Eliza added that she had asked her husband, author Thor Hanson, if he’d seen evening primrose at the gravel pit in the past, and he said yes, he first noticed it there over 10 years ago.

“So it sounds like it’s been there for a while and is maybe just having a good year,” she said.

The Burke Herbarium report says that evening primrose blooms from June through August.