Orcas, Lopez and San Juan Fire Team Up with DNR for Wildfire

From Orcas Fire and Rescue… 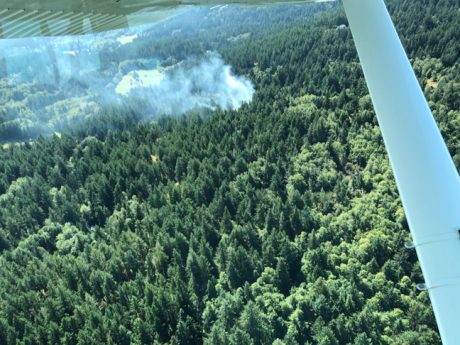 Orcas Island Fire and Rescue personnel responded to multiple reports of smoke in the 4000-block of Point Lawrence Road on the afternoon of August 24. Crews quickly triangulated a slow-moving wildland fire with aerial support provided by local pilot Pat Muffett. 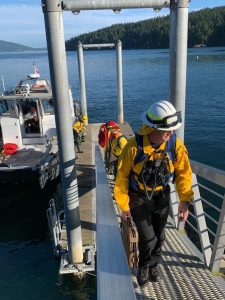 After completing a size-up the fire was determined to be approximately one acre in size and was consuming ground cover, brush, root beds, and trees with no structural exposure. It was a slow-moving fire and crews quickly got to work to isolate flames from surrounding brush and prevent the fire from spreading further to neighboring properties and homes.

Due to varied terrain and limited resources, Incident Commander Chief Scott Williams requested mutual aid from San Juan Island Fire, Lopez Island Fire, and the Department of Natural Resources (DNR). Within the hour DNR Helicopter 343 was in the air transporting water from local sources to the scene. San Juan Island Fire quickly mobilized San Juan Fireboat One with a crew of firefighters and made a stop at Lopez Island for additional firefighters before arriving at Lieber Haven Marina to offload for the assist. A DNR Engine and crew also arrived by ferry for second-day operations. 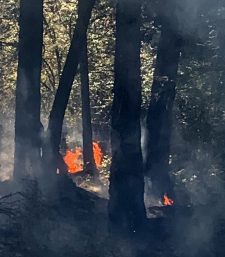 Between arriving engines, a shuttling water tender, and the helicopter, over 13,000 gallons of water was used in extinguishing the fire over a two-day period. Fire personnel continued to patrol the fire grounds throughout the week to check for hot spots and extinguish any flare ups. There were no reported injuries.

A special thank you to all mutual aid resources, including Doe Bay Café who provided nourishment to firefighting crews over the two-day period.