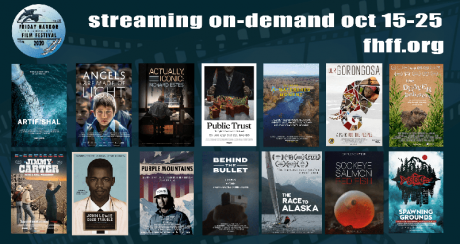 James Longley, recipient of the 2020 Friday Harbor Film Festival Local Hero Award, will participate in a special livestream Q&A at 8 p.m., Sunday, Oct. 18, giving viewers the opportunity to learn about his work and ask questions.

His most recent film about Afghanistan, “Angels Are Made of Light,” is showing on demand during the festival, Oct.15-25.

Full details about his film and Q&A are available at www.fhff.org.

Longley uses documentary filmmaking and photography as a way to enhance awareness of the wider world. His work focuses particularly on civilians in locations -The Gaza Strip, Iraq, Iran, Pakistan, Afghanistan – that are politically fraught and whose futures are intertwined with our own foreign policy.

He grew up on San Juan Island with three sisters and marine neurobiologist parents, Alison and Roger, long-time researchers at the University of Washington Friday Harbor Laboratories. James attended school in Friday Harbor through the 10th grade and worked during college as a projectionist at the Royal Theater – now the Palace Theater – and stocking shelves at Kings Market. Longley finished high school at Phillips Andover Academy and attended the University of Rochester, The Gornyii Institute in Leningrad, Wesleyan University, and the All-Russia Institute of Cinematography in Moscow.

Longley has been nominated for two Academy Awards (Sam’s Mother and Iraq in Fragments) and received Sundance Film Festival awards for cinematography, editing, and directing. Longley was named a MacArthur Fellow in 2009 and a United States Artists Ford Fellow in 2011. Longley was inducted into the Academy of Motion Picture Arts and Sciences in 2007. Longley’s student film in Moscow, Portrait of Boy with Dog, received a Student Academy Award in 1994.

The 2020 Friday Harbor Virtual Film Festival runs from Thursday, Oct. 15 through Sunday, Oct. 25, providing on-demand access to 20 award-winning feature documentaries, 12 short films and 11 student short films. All are suitable for the entire family. Full details about the films, how to view them, and how to vote for your favorites is available at www.fhff.org.

Purchase your All-Access Pass ($75) or 5-Film Pass ($35) now at www.fhff.org. Single-film tickets ($7.50) are also available. Gather your family together, as all can watch on one pass.