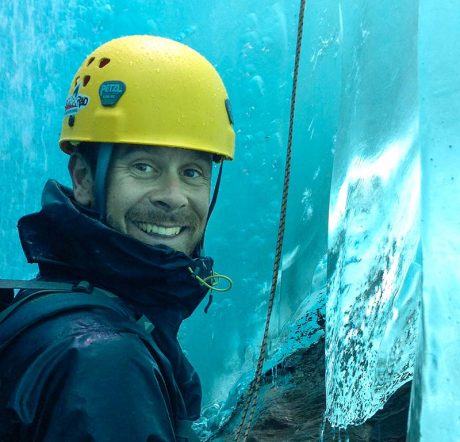 Join Eric Guth for a look into the rebirth of Mount St. Helens in a virtual lecture called “Fire and Ice: The Birth of Crater Glacier” at 6 p.m., Jan. 21. Register for this online event here.

Forty years after the eruption, a glacier now fills the void left by this devastating event. Beneath the ice is a labyrinth of glacier caves, sculpted by the heat of an active volcano.

Eric has documented four expeditions into the heart of Crater Glacier, photographing climatologists, microbiologists, and NASA robots in action.

His efforts and photos were published online with National Geographic on May 18, 2020, to coincide with the 40th anniversary of the eruption. He now shares his story with you.

Camera, passport, boots. These are the tools Eric has relied on most during his 15-year career as an expedition photographer.

From spelunking in the crater of an active volcano to deploying time-lapse cameras in Antarctica, and to documenting modern culture across the Arctic, Eric looks for stories of people and places off the beaten path. When not on assignment, he leads photo workshops alongside fellow National Geographic photographers.

Complementing these pursuits, Eric has a background in Environmental Studies, a degree broad enough that he spends the other half of his year as a naturalist, sharing insights on everything from bird migration to banana slug reproduction aboard ships around the world.