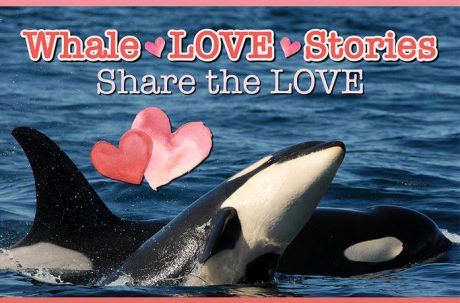 From the Center for Whale Research

We asked Center for Whale Research members and supporters to share a short story about a special whale, encounter or friendship that developed from a shared passion for whales. We are very grateful to those who shared their stories. This is what they wrote (listing in the order that we received them).

The Whale. The Legend. J1 “Ruffles”. He was quite likely the most famous and well-known wild orca in the world, next to Keiko.

In front of thousands of adoring fans, he would slowly surface and then just as slowly disappear beneath the water again, as if he knew how impressive that wavy dorsal fin was. People from all over the world saw him and loved him, but one admirer, in particular, remains etched in my memory.

Danny (name changed for privacy) was a special needs man who was a passenger on our whale watch boat at least once a year. He loved us, and he loved Ruffles.

Each time he walked on the dock to start the trip, he would embrace all of us in a huge bear hug so strong we would have to hang on to each other to keep from falling in the water. We adored him. And we knew that whenever he was with us, we were going to have a fantastic day with J Pod. Because Danny had a special connection with Ruffles that was difficult to comprehend.

I’ll never forget the day we were watching J Pod traveling close to shore off Henry Island. Ruffles left the group and did a complete circle around us. He surfaced four or five times, always right next to Danny, who was laughing gleefully as he followed his whale around the boat. After Ruffles had visited his friend, he returned to Granny and the rest of the pod close to shore and continued on his way.

My last year working on the boat, the last day I saw Danny, we had a report of the L12s at Salmon Bank while J pod had headed north to the Fraser River the previous day. We had a choice to make – go for the sure thing or take the chance that J Pod would be headed back down Rosario Strait, which they often did in those days. It was an easy decision – Danny was on the boat.

We took the chance and, of course, J Pod was there, as we knew they would be. And as he had done so many times over the years, Ruffles left the group and surfaced right where Danny was standing. It was a wonderful last memory of the strange and beautiful relationship between the two of them. I can’t begin to understand or explain the connection, and maybe I don’t want to. Maybe it’s enough just to know that it existed, and to remember the joy it brought to a friend.