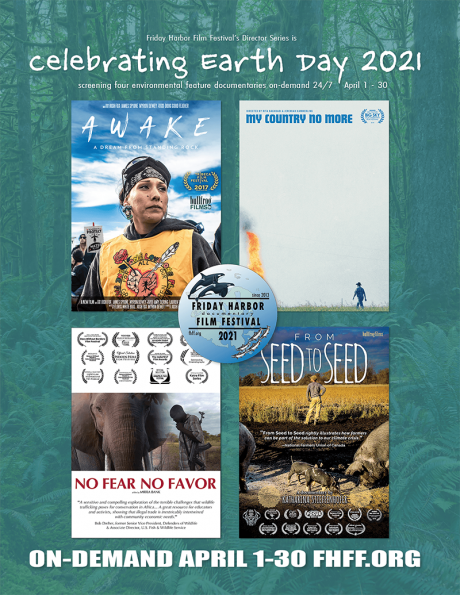 The Friday Harbor Film Festival Director Series presents a varied selection of not-to-be-missed documentaries to brighten your life each month. Beginning April 1, in honor of Earth Day, four feature films will be available 24/7 at fhff.org.

The films include “Awake, A Dream from Standing Rock,” “My Country No More,” “No Fear No Favor” and “From Seed to Seed.” Screen all for only $9.95 or each film for $2.95. Free scheduled livestream Q&As are planned for each film. Details will be posted on the website.

“Awake, A Dream from Standing Rock,” is directed by Myron Dewey, Josh Fox and James Spione. The film is a record of the Standing Rock Sioux Tribe’s massive peaceful resistance to the Dakota Access Pipeline.

The pipeline brings fracked crude oil from the Bakken Shale in North Dakota to Illinois, passing through their land and underneath the Missouri River, threatening this source of drinking water for over 18 million people. The film documents the story of Native-led defiance that has forever changed the fight for clean water, our environment and the future of our planet. It asks: “Are you ready to join the fight?”

“My Country No More” is directed by Rita Baghdadi & Jeremiah Hammerling. Between 2011 and 2016, drilling for oil in America reached an unprecedented peak, setting off a modern-day gold rush in one of the most rural communities in the country: Trenton, North Dakota. While Kalie Rider and her brother Jed are striving to rebuild farming in their family, their uncle Roger decides to sell a piece of his land, triggering local industrialization and community controversy.

Seeing that Jed’s young family would have to move away, Kalie learns to organize and resist. This film challenges the notion of “progress” as it questions the long-term human consequences of short-term approaches to land use, decisions that ultimately affect all Americans, rural and urban alike.

“No Fear No Favor,” is directed by Mirra Bank and illuminates the wrenching choices faced by impoverished Africans who live where the community meets wilderness—on the front lines of Africa’s poaching crisis. Shot over two years in Zambia’s Kafue National Park, Kenya, and Namibia, the film follows local women and men who fight the illegal wildlife trade through cooperative law enforcement and innovative conservation. Using community conservancies, they protect wildlife and the region’s wilderness heritage, return eco-tourism profits to local people, and generate sustainable livelihoods—especially for women and girls.

“From Seed to Seed” is directed by Katharina Stieffenhofer and follows two Canadians, Terry and Monique, who left their careers in opera to pursue their true passion: ecological farming. Their young family, along with both small- and large-scale farmers and a diverse group of scientists, join forces to blend age-old traditions with cutting-edge science in order to develop improved methods for growing healthy food within a supportive community, while accepting the realities of a changing climate. The film tells a hopeful story about a global social movement that regenerates the land, farming, and communities.