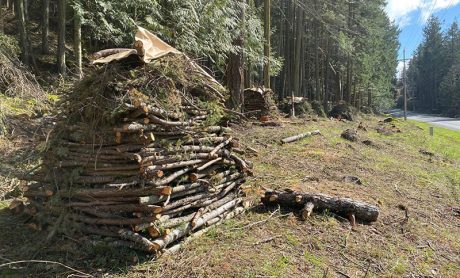 Orcas Power & Light Cooperative is clearing the right-of-way areas under power lines to protect the electrical system from outages, remove forest fuels that could feed a wildfire and improve forest health through biochar amendments to the soil.

The Civilian Conservation Corp will begin burning conservation piles on Eastman Road the week of March 29.

The recent projects on Eastman Road on Orcas Island and Squaw Bay Road on Shaw Island are examples of the collaboration between OPALCO, Rain Shadow Consulting and the Civilian Conservation Corp, which are bringing their strength, ecological expertise and all-weather fortitude to the projects.

The main objective of this collaboration is to keep a safe clearance around OPALCO’s overhead transmission lines.

On these projects, Rain Shadow Consulting is contracted to provide local and professional arborist services to bring the areas into compliance with OPALCO’s specifications for power line corridors and the Civilian Conservation Corp is managing the woody mass for wildfire prevention and building piles for conservation burns to create biochar for soil amendment and forest health. 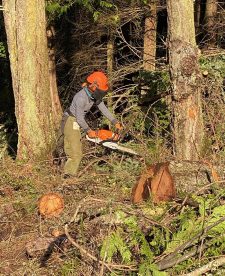 The corp is an 11-month AmeriCorps program that provides crew members a stipend, college and medical benefits, housing and a certificate in Ecological Restoration from Huxley College of the Environment at Western Washington University.

The crew works with local public and preservation organizations on projects like this one, ranging from invasive weed removal to ecosystem rehabilitation. The young adults of the Civilian Conservation Corp will also lead and mentor the youth participants this summer.

Kevin Ranker led the effort to establish the Civilian Conservation Corp on Orcas and acknowledged the hundreds of individuals who stepped up to make the program possible.

“COVID has had a big impact on our islands,” said Ranker. “But, this is an example of how resilient we can be as a community. With the help of OICF, we raised $235,000 for this program and are creating community benefits for years to come.”

The San Juan Islands Conservation District and the Civilian Conservation Corp are looking to advance innovations in conservation and ecology, and the conversion of excess fuels into biochar is one of these methodologies.

Biochar was recently adopted as a nationally recognized best practice by the U.S. Natural Resource Conservation Service for its ability to increase water, nutrient, and carbon storage in forest soils.

This practice mimics the charcoal development that was a natural byproduct of forest fires that once frequented the landscape regular fire return intervals. Fires in old-growth ecosystems, for example, converted 4-6% of the total biomass into charcoal.

Now, this Conservation Burn technique used by the Civilian Conservation Corpand Rainshadow Consulting can convert nearly 20 percent of the biomass as charcoal.

“Our modern San Juan County forests, on average, are overstocked and congested with a high number of sickly trees that are all competing for nutrients,” says Kai Hoffman-Krull, the San Juan Islands Conservation District Forest Health Manager. “These trees provide high risk for catastrophic wildfire and windthrow that can turn off our local power. We are working to convert a problem into an asset that can store nutrients and carbon for generations, increasing our forest resiliency in a changing climate.”

Kai is working with a team of researchers at Oregon State University on determining the soil enhancements of biochar in our archipelago soils, with the results being published later this summer.

The project on Orcas Road is visible as you drive to the ferry landing and is on land owned by Barb and Sam Pesola.

“I’m happy to cooperate with OPALCO – I don’t like to have my power interrupted,” joked Barb. “I knew nothing about forestry conservation, but these young people on the CCC crew have taught me quite a lot about bringing it back to its natural state and it looks just beautiful. I’m grateful to get all that woody mass out there. Historically natural fire cycles would’ve taken care of this – but hasn’t happened in a long time so this is a controlled way of bringing fire back to the landscape.”

Many have asked if OPALCO could move the overhead transmission lines underground.

Nearly 90% of OPALCO’s lower-voltage distribution power lines are underground but, because of the high voltage – 69,000 volts – the transmission lines are not safe or cost-efficient to bury underground.

The danger of a dig-in, which happens frequently, is too high, and outage restoration times would be much greater without access to the lines. The lines would have to be buried deeper than our rocky terrain would permit in most locations.

Additional power line clearing projects are planned throughout the islands this spring and summer to mitigate potential power outages, prevent wildfires and improve forest health. Contact OPALCO if you have trees or shrubbery close to power lines on or near your property.

Members are responsible for keeping a 10-foot clearance around the green boxes (transformers) that may be on your property so that access is clear for maintenance and emergencies.