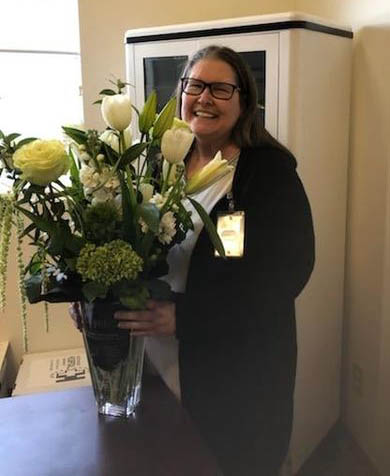 The retirement announcement of Superintendent Pamela Hutchins on March 25,  marks the end of a critical era for the San Juan County Public Hospital District No. 1.

“The Wednesday before Thanksgiving 2012 the old medical center was fully staffed,” she recalled, “and the day after it was empty – except for me.”

Instead of going with the clinic staff, Hutchins was hired as the district’s superintendent. The hospital district has two levies, one for San Juan Island EMS and one for the clinic services, the latter levy becoming primarily a subsidy payment to PeaceHealth.

Hutchins stayed at the old medical center building until EMS Chief Jim Cole invited her to work from the station in 2013. She remained there until the hospital district got its own offices again in March 2017.

“It was energizing to be immersed in EMS,” she said, “I have thoroughly enjoyed it.”

During her time at the IIMC, Hutchins managed the financial aspects of a Medicare demonstration project called the Frontier Extended Stay Clinic as well as an HRSA Telepsychiatry Grant. This grant management allowed the district to stay fiscally solvent until the new hospital could be built.

The superintendent at the time, Beth Williams-Gieger, said, “Without Pam’s accounting expertise, my job as IIMC administrator and district superintendent would have been impossible to manage. Pam’s experience with federal and state grant management will be sorely missed.”

Part of getting PeaceHealth to agree to the subsidy agreement that currently helps fund clinic services was making sure that $500,000 of IIMC debt was paid off. Hutchins had to help monitor and implement furloughs and cut bills as low as possible for more than a year. A parallel effort successfully raised more than $10 million to fund the building of the new hospital, and the effort to bring PeaceHealth was successful.

Dr. Michael Edwards, who was on the hospital district Board for many years, added, “During the design and construction of the PIMC over nearly seven years, Pam along with then-superintendent Williams-Geiger and the hospital district board made very difficult and unpopular financial decisions necessary to maintain 24/7 medical services. Pam as the financial officer took much of the heat, but in the end, Pam was our savior and champion. We who lived it with her will be ever grateful.”

The hospital district is now working on long-term care.

“I was glad I got to participate in the first long-term care task force following the closure of the Life Care Center,” said Hutchins.

That effort has culminated in two large HRSA grants, and the district is working with its partners on aging-in-place programs.

The board selected Nathan Butler to replace Hutchins as superintendent.

He said, “I appreciate Pam’s example of commitment to our community and look forward to carrying her work forward.”

Current Board chair Anna Lisa Lindstrum added, “Pam was present through many of the significant changes that have occurred in healthcare in our island community and the hospital district is so grateful for all that she has accomplished. We look forward to seeing what she does next!”