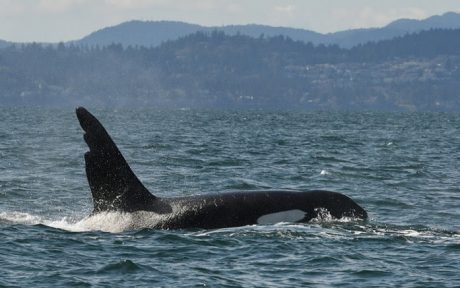 From Center For Whale Research

The Center For Whale Research’s 15th orca encounter in 2021 was on March 29 and brought sightings of the whale “Chainsaw.”

The whales were still heading quickly north toward Henry Island in loosely spread groups. Our first pass was a semi-backlit one with a lot of whales coming up at once. We saw some hints of the T49As and T71s as they passed.

“Chainsaw” is also easy to pick out of a crowd. He seemed to be in a group that included several young males slightly behind the others. By the time we got to the good light side, the groups began splitting up and many whales started traveling quickly toward Open Bay. Most of the T71s and a few others took a more northwesterly route perilously close to the border so we decided to go for the whales safely on the U.S. side.

Read more about the encounter at www.whaleresearch.com.