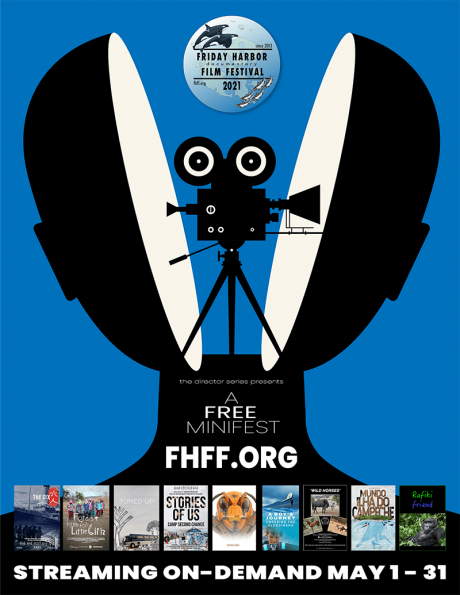 For the month of May, the Friday Harbor Film Festival Director Series presents a “mini fest” of four new feature documentaries and five short films submitted through FilmFreeway.

These films will be available 24/7 at fhff.org from May 1–31. Watch all the films at no charge. Filmmaker Q&As will be scheduled for some of the selections.

Viewers are asked to participate in a crowdsourcing project to evaluate the films, assigning a rating and providing comments. Audience choice films will be included in the October Friday Harbor Film Festival.

In appreciation for audience assistance, the festival will hold a drawing from all individual ratings. Each film that a viewer rates will count as one entry. The winning viewer will receive a free pass to the 2021 film festival.

The top 10 audience curators, based on the number of films watched and rated, as well as the extensiveness of comments, will receive discounted tickets to the 2021 film festival.

Votes will be collected with the rating scale used for Audience Choice Awards used in past years:

Audience choice films will be announced during a livestream discussion with film festival directors on May 30. Top audience curators may be invited to discuss their favorite films. Details will be posted on the fhff.org website.

“Stories of Us: Camp Second Chance”: Director Melinda Raebyne embeds herself at one of Seattle’s homeless camps, Camp Second Chance, one winter, challenging public ignorance and humanizing a population that locals would rather neglect.

“Forest Hymn for Little Girls”: This film follows the exploits, struggles and daring feats of young girls under the age of six as they take to the woodland.

“Campeche Island World”: Agents on the island known for its crystal-clear waters and rock engravings work to preserve the island’s environmental and cultural value.

“The Six”: What became of six Chinese survivors of the sinking of the Titanic? This film tells their extraordinary story of survival and dignity in the face of racism and anti-immigrant policy that still reverberates today.

“Wild Horses”: A revealing look into the plight of America’s wild horses.

“The Hunt for the Asian Giant Hornet”: Scientists race to stop the spread of a new invasive species to bring balance to our ecosystem before it’s too late – but first they have to find it.

“Tuned Up”: Pat, a guitarist in the band Carmanah, advocates for climate action and environmental justice, touring in a 1970’s bus running on used vegetable oil, inspiring people to make their own small changes.

“Rafiki – Friend”: The story of Rafiki, a silverback mountain gorilla from the Bwindi Impenetrable Forest National Park in Uganda, Africa.