Twenty Years Of Creativity At The Whiteley Center 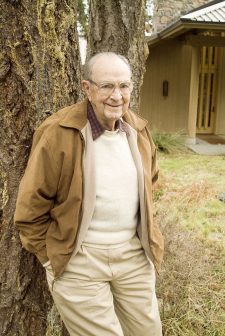 The Whiteley Center, located at the west end of the campus of the Friday Harbor Laboratories, is celebrating 20 years of providing a place for uninterrupted thinking and working.

The Center was Helen and Arthur Whiteley’s gift to scholars needing to escape to a quiet and peaceful surrounding. Arthur’s vision, as relayed to scholar Ted Goslow, Jr., arose from a shared belief with his wife Helen Riaboff Whiteley: that “humanity’s best path forward encompasses all creative endeavors from the arts to conservation.”

To that end, Arthur pursued a center organized to support scholars from widely diverse disciplines. Thus the center serves many types of scholars, not just scientists.

Helen and Arthur’s vision began years before the Whiteley Center was built. It took determination and attention to detail – as well as many meetings – to persuade others that putting a scholarly retreat on the campus of a renowned marine laboratory was a good idea.

Arthur was tenacious, energetic and persistent, and he made it happen.

Arthur WhiteleyArthur and I became friends immediately, and I was very impressed and appreciative of how involved he was in the operation of the Center. He was eager to meet the scholars and learn about their many fascinating projects. The Whiteley Reading Room library attests to the numerous and varied accomplishments of those who have spent time there, writing many of the books that are found on the shelves and scattered around the tables.