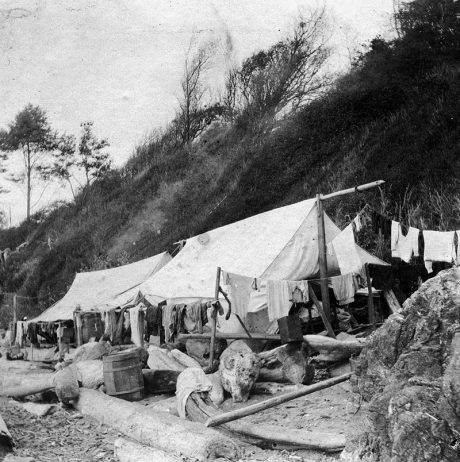 Contributed Photo. John Ross, Sr. family camp on the beach below Peter Lawson’s farm, circa 1905. Image can also be found in the “Images of America: San Juan Island” book by Mike and Julia Vouri and the San Juan Historical Society.

Before there were family vacation cabins or second homes for retirees from the mainland, there was a different kind of part-time resident on San Juan Island.

They came for the lucrative fishing seasons and set up camp on westside beaches, among other places. Some of these were purse seine families from Gig Harbor, as seen in the above image of the Ross family encampment, welcomed by Peter Lawson, Sr. who saved space for them (and many others) on the bluff and at the beach below his Eagle Point farm.

They came in the summers for the bounty of salmon found at the aptly named nearby Salmon Bank. We like this rare close-up image because it shows daily life in a fish camp. Laundry must go on!

The Ross family business was headed by John Ross, Sr. He was born in 1861 on the island of Premuda in the Adriatic Sea, now an island of Croatia, where his family name was “Jadrosic.”

John emigrated to the U.S. when he was in his 20s and soon settled in Gig Harbor in 1888. He and his wife Johanna (or Iva) raised a large family which, no doubt, helped the family business thrive and pass on to the next generation. So, the Ross family of Gig Harbor is a good example of seasonal residents for many decades.

One interesting story we found made the local news in 1907. As the San Juan Islander newspaper reported on Oct. 19 of that year, the County Assessor included seasonal fish camp residents in his enumeration for a countywide census.

This brought out the ire of Peter Lawson, Sr. who testified against this decision as one having “the sole purpose of increasing official salaries at the expense of the taxpayers.” The county commissioners supported the assessor and the seasonal residents stayed on the census return.

The history of fishing in the San Juans is a big and complicated story. This is just a brief look at a very small moment in time.

We look forward to a new book on the history of fishing, projected to be released later this year. If you have historical fishing photos to share, please contact The San Juan Historical Society and Museum. You may have a good photo we don’t have yet in our archives and we can scan it in.