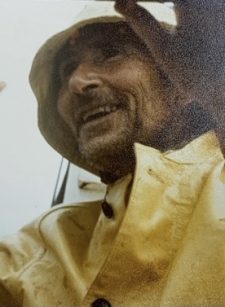 Tal on the 53-foot ketch, the Little Revenge, offshore in the Pacific.

Tal grew up with his family in Laguna Beach, CA where surfing, fishing and boating became his life-long passions. He attended UC Santa Barbara, and served in the US Merchant Marines in the South Pacific and Philippine Islands. Tal was drafted into the US Army during the Korean War and stationed in Karlsruhe, Germany, where he married Lee Stegall of Los Angeles in 1952.

Tal and Lee moved to Tucson where Tal received a mining engineering degree from the University of Arizona, and their daughter Lisa was born. After graduation the family moved to Santa Rita, New Mexico where Tal worked as an engineer at the Kennecott Copper Mine. Their son Philip “Flip” was born in 1958 in Silver City, New Mexico. 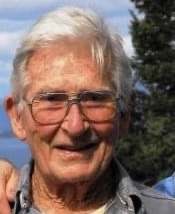 Tal and Lee returned to the west coast in 1959 where Tal worked with the CA State Highways San Diego. They lived near the beach in Del Mar, where Tal shared his favorite pasttimes with his family. Lisa and Flip have great memories of Tal teaching them to surf /body surf, and late nights surf fishing at the beach. In 1976, the family bought a 53’ Wm. Garden designed ketch and Tal led his family on a sailing adventure to Baja and the South Pacific. Upon their return to San Diego, and upon advice of new friends met along the way, Lee and Tal decided to move to the PNW.

They settled in Friday Harbor, San Juan Island, in 1979, where Tal worked as an engineer with Washington State Ferries for the following 13 years.

With great appreciation for the loving staff of Caring Hearts Adult Family Home in Anacortes, Washington; and for the many kind gestures of our Friday Harbor and Del Mar families and friends. In lieu of flowers, donations can be made to California Surf Museum, Oceanside, California; or to the San Juan Island Library.
Photo gallery of Tal and guestbook available online at Evans Chapel.