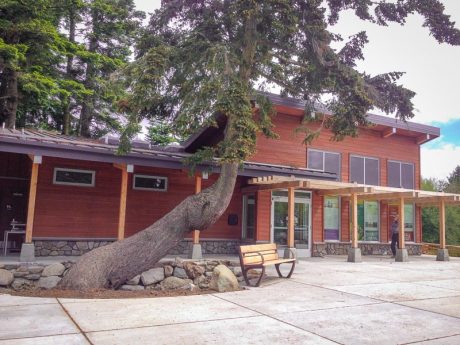 The new visitor center at American Camp will be opening this weekend. During construction, care was taken to preserve the bent Douglas fir out in front, which may have been a native American marker tree, where messages could be left for fellow members of a nomadic tribe – Louise Dustrude photo

The new American Camp Visitor Center parking area and trailhead access has been open to the public since mid-April, after more than a year of construction, and the building and new restrooms will be open by Memorial Day weekend. Although there is still work to do to complete the exhibits, the reception desk will be staffed and the bookstore operation will be open.

Bertha, the bald eagle who has nested in the area for some 32 years, and her current mate have been around for a few days, but there are no signs of their nesting this year. NPS staff diligently monitored the eagle’s nest throughout the construction period and scheduled certain types of construction activities (noisy ones) outside of the nesting and fledge periods. Superintendent Elexis Fredy says she was delighted see that the construction project did not deter Bertha from staying in her nest!

The trail from Friday Harbor, known as the American Camp Trail or ACT, has been continuously open except for the portion between the Frasier Homestead Preserve and the American Camp Visitor Center (due to construction of a new access road and septic system construction) and that section is now reopened. As NPS seasonal staff return to the park and the annual maintenance cycle is in full swing, crews will be addressing overgrown vegetation along all park trails, including the ACT. Additional vegetation clearing in the vicinity of the new access road / Cattle Point Road intersection will be completed in the coming weeks.

Fredy offers a note of caution to trail users: “Despite posted speed limits through the park on Cattle Point Road, many drivers speed through the area, making the new access road (and the crossing of Cattle Point Road) something that should be approached and traversed with great caution.”

The American Camp trail opened to the public with a dedication ceremony on June 1, 2013. It was created by the San Juan Island Trails Committee, assembled from segments belonging to the Port of Friday Harbor (airport), San Juan County (public right-of-way) Fairway Drive Homeowners Association, the San Juan County Land Bank, and of course the National Park Service through American Camp. In addition, there are segments on easements over private property donated by Alice Hurd, Louisa Nishitani, David Smith and Jane Weil, Jennifer Woodbridge, and the late Ted Middleton. In a few places it is necessary to bypass private property by walking along the county road right-of-way.

The story of the trail dedication can be found at https://sanjuanupdate.com/2013/06/act-trail-dedication-ceremony/

The trail is six miles long, the longest long-distance trail on the island, surpassing the three-mile-long Barracks to Boats Trail from English Camp to Roche Harbor Resort, dedicated in 2009.