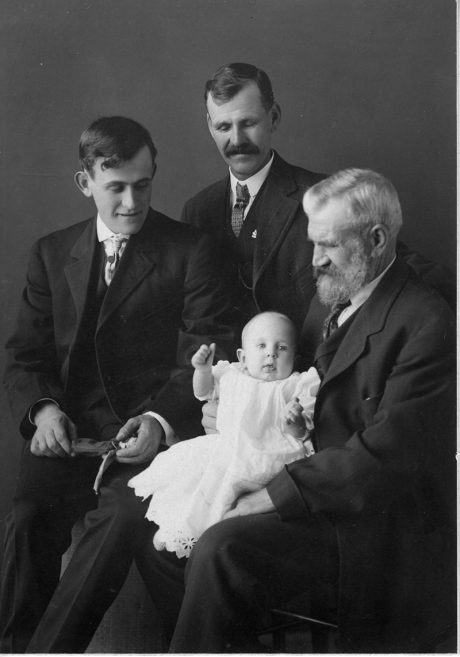 Father’s Day this year will be on June 20.

When thinking about a historical photograph to go with a June history column, this four-generation portrait, seen above and shared by the Guard family, came to mind as a great example of the passage of time in a family and its lineage from one father to the next.

Paul Guard was born in England in 1839, married Elizabeth Melhuish there, and brought his young family to the United States from Somerset, England in 1870.

They first settled in Kansas before coming westward to San Juan Island in 1889. That same year, he and Elizabeth bought the 160-acre homestead of William and Matilda Higgins in fertile Beaverton Valley.

The Guards then sold half of the acreage to their firstborn, Frank. This was the beginning of the Guard family farming legacy here. These two adjacent large-scale farms were known for their crops of oats, wheat, hay, and their orchards.

Frank’s son Roy was also an island farmer, like his father and grandfather. This brings us (portrait-wise) to Roy’s son William Paul Guard, the baby in the photo, who became a veterinarian on the mainland.

With this June column, the history columns will go on hiatus for a while. In the meantime, get out there and make some island history with your family and friends! Please stay in touch with the Historical Museum by sharing some of the history you are making.