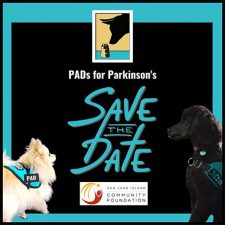 Between August 18 and August 22, the San Juan Island Community Foundation has pledged to match up to a thousand dollars given to PADs, the first program in North America to train dogs to detect an odor associated with Parkinson’s Disease.

This great news was followed by a good-hearted anonymous donor who pledged to match the match. This means every dollar contributed to PADs between August 18 and August 22 will instantly rabbit itself into three dollars up to the first $1000 contributed. As the dogs would say (if only they could) that’s a lot of turkey.

You can take advantage of this match on match for PADs by going to the SJI Community Foundation website at www.sjicf.org on August 18. Once on the site, just select PADs from the online fund-raising catalog that will be prominently featured between the dates of the 18th and 22nd.

You can also mail a check to the San Juan Island Community Foundation, PO Box 1352, Friday Harbor, WA 98250. Just be sure to write “PADs” in the memo field and mail your check between the dates of August 18 and 22. Woof. Wag. A huge thank you. And for good measure, another wag.

We extend our continued gratitude to the training session volunteers, board members and handlers who continue to support our 16 fabulous sniffer dogs; and to the many individuals and support groups who supply donor samples for the Program. We extend our very deep gratitude to our sample donors who are battling Parkinson’s Disease. You provide the inspiration for the work we do.

On behalf of the entire PADs team, we stand with two legs and four paws as grateful and honored members of a community that continues to work for a better world.

About the San Juan Island Community Foundation:
The SJICF is comprised of more than 40 funds representing individuals, families, and organizations with the purpose of providing a valuable community resource for both donors and local nonprofit organizations. The SJICF provides donors with an avenue for funding mission-directed nonprofits by supplying trusted stewardship for philanthropic efforts. The SJICF provides nonprofit organizations with avenues and guidance for achieving and providing accountability for fund-raising goals. Since forming in 1994, the SJICF has operated with the mission to help the San Juan Island Community thrive through inspired and informed generosity under trusted stewardship.

About the Anonymous Donor:
Someone somewhere who is big-hearted, loves dogs (wag) and hates Parkinson’s (Grrr).