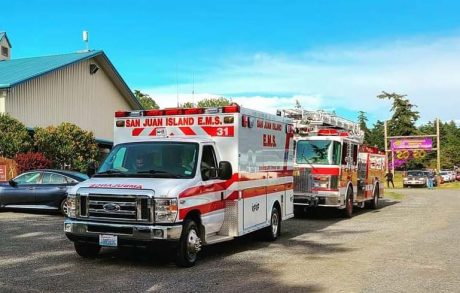 The hospital district is happy to announce that it has reached agreement with San Juan Island Fire and Rescue to take over Emergency Medical Services on our behalf in 2023, pending voter approval. “It’s been a long process, but we’re ready to support the Fire District taking this to the public,” said hospital district commissioner Gail Leschine-Seitz.

This is separate from the hospital district’s decision to acquire the Village at the Harbor and expand long-term care for District residents via a proposed hospital district levy lid lift this fall.

An EMS levy under San Juan Island Fire and Rescue will be on the ballot with an effective date for funding for January 1, 2023 at $0.50 per $1,000 in assessed value. This will establish funding for the integrated service. The current San Juan Island EMS levy will be allowed to expire at the end of 2022 rather than being renewed, and there will be no overlap between the levies.
“We’ve worked hard to say exactly what we’re doing and when, and this is consistent with our roadmap to implementation passed last March,” said Commissioner Trish Lehman. “We’ll use next year for a transitional period.”

Many of the steps in the integration process have already been completed, most notably, the Fire District annexed the outer islands that the hospital district covers (e.g., Henry, Johns, Stuart) and successfully annexed the Town of Friday Harbor last April. This makes the boundaries of both districts the same, facilitating a smooth transition for residents.

“One of the exciting things about an integrated service is the ability to provide better marine response by pooling resources,” said Nathan Butler, Superintendent and current EMS Administrator: “The other thing I’m really excited about is substantially more staffing depth, with over 15 full-time responders, plus leadership and volunteers. During COVID-19 we couldn’t hold an EMT course to replace attrition, and the number of people on the island is just staggering.”

Documents relating to this project can be found at https://sjcphd.org/integration.

“This represents a big change for the hospital District, proposing the transfer of EMS service to the Fire District, and instead expanding into long-term care,” said hospital district Commissioner Everett Clary. The hospital district also subsidizes Peace Island Medical Center through PeaceHealth, a separate entity, to ensure other healthcare services.