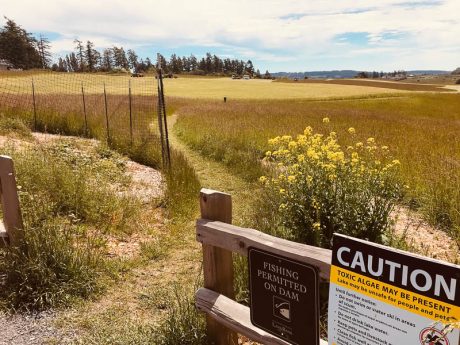 As the summer’s heat wanes, here’s a fun easy hike to get you out there. This approximately mile-and-a-half long eastern edge of the Zylstra Lake loop is seasonally closed October thru March so now is a great time to enjoy it. Keep all dogs on leash please.

Ready? Let’s begin from the Zylstra Lake Land Bank parking lot off San Juan Valley Road and walk along the road edging the leased agricultural preserve. Hay is grown and bundled there for winter use. The importance of preserving agricultural open space was one of the many critical factors behind the collaborative effort of the Land Bank and San Juan Preservation’s Trust purchase of the property in 2015.  At the time of sale, there was a competing offer on the table from a developer who envisioned a 28-home lakefront community. Fortunately, the sellers favored conservation.

Along this portion of the trail one can notice quite a few invasive weeds: Curly (Yellow) Dock, Queen Anne’s Lace (Wild Carrot) and Field Morning Glory. Curly Dock has some nutritive and medicinal properties, whether from green basal leaves to seeds encased in rust colored pods. It can also be mildly toxic and as is common with most invasives, it outcompetes other native plants.

Queen Anne’s Lace earned it’s common name from a legend telling of Queen Anne of England (1665-1714) pricking her finger and a drop of blood landed on white lace she was sewing. Queen Anne’s lace is high in sugar second only to the beet among root vegetables which might explain why early Europeans, Romans and American colonists used it as a food source. The pink in some of these particular blossoms could be caused by alkaline soil. (NOTE: Never eat any wild plant unless you know exactly what it is and how to use it.)

Field morning glory has a welcoming name, but don’t be deceived: This hardy plant is also called bindweed for its habit of winding its stems on other plants to spread and is very hard to eradicate. Its taproots grow deep and the 500 seeds per plant can remain viable for decades.

For thousands of years Coast Salish native tribes would have found sustenance here, hunting deer and wildlife and gathering Camas bulbs and other useful plants. The Valley’s former seabed brought deeper fertile soils and the location within the False Bay Creek watershed also made a welcoming habitats for early homesteaders. Since the 1860s and 70s homesteaders and their followers “put down roots” here and grew orchards, peas, strawberries, root vegetables and grains. They also grazed livestock, sheep, pigs and dairy cattle. The island’s root vegetable crops, especially turnips, were a money making export to help feed oxen used for logging. They helped prevent binding occurring with grain feeding, but watch out, too much and they will develop “scouring” and I think you can guess what that is. 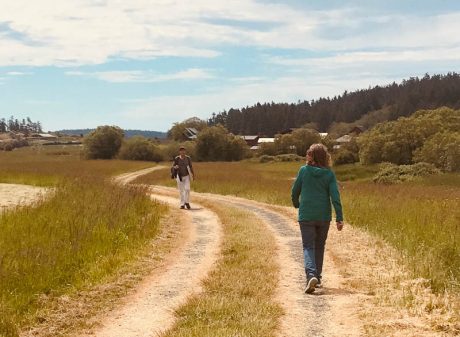 Down the road one gets a peek at the red buildings of October Farm, now a B&B. This area was once part of the Wooden Shoe Farm established by Fred and Rena Zylstra who gathered up three homesteads for purchase in 1960. Then in 1963 they created this 48-acre lake to obtain summer irrigation water for their breeding ranch of prize pure-bred Herefords.

Before cattle, sheep used to be very numerous on the island. Introduced in 1853 by James Douglas and managed by Charles Griffin of the Hudson’s Bay Company just four years later, up to 4000 or so sheep were run from station to station, pasture to seasonal pasture along a road known as Cowichan.

“Douglas, Griffin, and a team of Cowichans built a road…north of First Prairie and Port L’enfer (Hell’s Gate”—later transcribed as Portland Fair) to the center of the island to access Oak Prairie (San Juan Valley), named for its surrounding ring of Garry oaks.” Boyd Pratt  Island Farming

Enter the infamous Pig shot by “squatter” Lyman Cutler in 1859, a jurisdiction conflict causing a territory fight between the US and Great Britain. In the “Pig War” era of the 1850s and 60s you could have seen and heard the tramping feet of horses and sometimes American’s mules, passing nearby. The 18-mile route between the two opposing military camps, American Camp to the south and English Camp to the north, ran right in the middle of what is now Zylstra Lake. Known now as the Old Military Road, it was a vital link in establishing relatively rapid communication between the camps, thereby assisting a peaceful end to a bloodless war, except for the pig of course!

After the curve of the road, if you’re lucky you will see a few horses and farm animals at the Island Haven Animal Sanctuary, “a safe place to call home forever.” Hosted by October Farm, their mission is to provide lifetime care to these animals who can still lead a quality life but due to disabilities or old age are unable to find homes. (islandhaven.org) 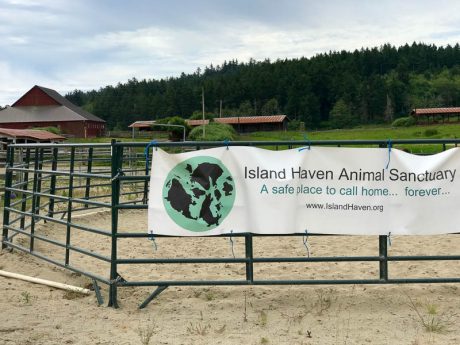 On the road side, take note of the strongly rooted, thorny Creeping (Canada) Thistle.  Although its purple blossoms and numerous seeds are attractive to birds, this thistle’s extensive root system also produces chemicals that alter the pH levels in the soil, giving native species even more trouble.

As you venture up the gradual incline enjoy Willow, Snowberry, Wild and Nootka Rose, Common Hawthorn, and Himalayan Blackberry. Late in the season you can also sometimes find the pretty yellow/orange blossoms of Bird’s Foot Trefoil which attracts bumblebees. When added to livestock feed it can prevent bloating and another bonus is that like other vetches and members of the pea family, its roots add nitrogen to the soil. 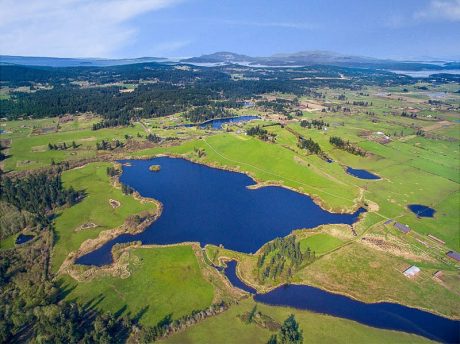 Past the forest of fir, one can view and walk on the larger of the earthen dams, both shown in the lower center of this aerial photo. The lower pond is especially important to migrating water fowl and is the reason this section of the Zylstra Lake loop is closed to the public from October thru March.. 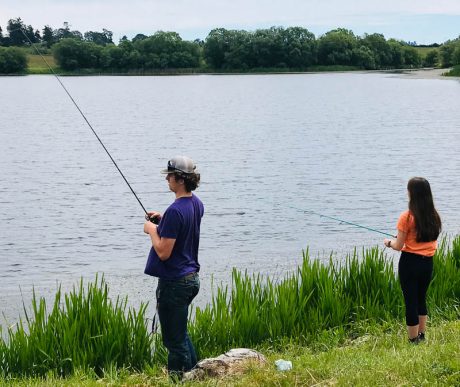 Fishing for bass is allowed from the dam embankment. By continuing over the dam you can enjoy the rest of the 3-mile Zylstra Lake loop back to the Parking lot or retrace your steps.

Hope to see you out there!

Part of the Zylstra Lake trail will eventually be a link in the Old Military Road Trail (OMRT) which is hoped to run 18-21 miles from American Camp to English Camp. For a more in depth guide of the remaining part of the 3-mile Zylstra Lake trail please see the 2020 Fall OMRT Trail Times on our website. On our homepage, a short movie includes our mission, island history and the beauty of the island.

Note: Zylstra Lake Preserve is critical for salmonid recovery. The Preserve is situated in the largest watershed on San Juan Island with a mission to improve the quantity and quality of freshwater within the lower courses of False Bay watershed. False Bay Creek runs into the marine estuary of False Bay, a University of Washington protected biological preserve.