Cutting the Ribbon for a New Location and a New Name 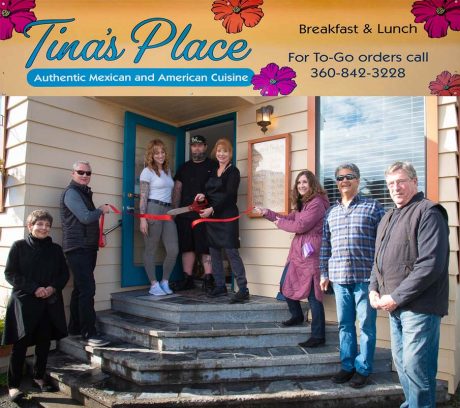 You remem­ber Tina’s Tacos from up on Blair Avenue? Well they’ve moved and changed their name to Tina’s Place. The new loca­tion is down­town on the cor­ner of Front Street and A Street where The Hun­gry Clam used to be, over­look­ing the fer­ry lanes.

And along with a loca­tion change and name change is a menu change as well — they’ve added BREAKFAST! And some oth­er non-mex­i­can food as well.

They first opened on Blair in June of 2017 when Tina and Grant Keane took over what had been Tia’s Tacos. Fast for­ward to August 2nd of this year when they got the new loca­tion and start­ed paint­ing and remod­el­ing (all while simul­ta­ne­ous­ly stay­ing open on Blair Avenue) until final­ly open­ing doors at the new place on August 24. Tina says she could­n’t have done it with­out her kids Tabatha and Jacob.

They’re open Wednes­days thru Sat­ur­days, 7am to 4pm serv­ing break­fast and then lunch, and also on Sun­days from 7am to 2pm for break­fast only.