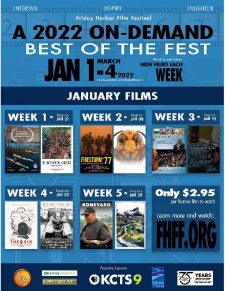 Friday Harbor Film Festival’s 2022 BEST OF THE FEST series begins brightening your winter on New Year’s Day. Each week during January and February a new event bucket of documentaries, each containing a feature film, a short film, and recorded filmmaker Q&As, will be available on demand on the website, www.fhff.org.

All the films are among the top ten features and top ten shorts shown during the festival last October.  Top student films will be shown in February.  Tickets are available online.  Each event bucket costs only $2.95. To support feature filmmakers, they will receive half of this fee.

The schedule for January is:

FHFF greatly appreciates the work of the filmmakers, the generosity of our sponsors, and the support of all lovers of great documentary films. Check out everything on our website: www.fhff.org.