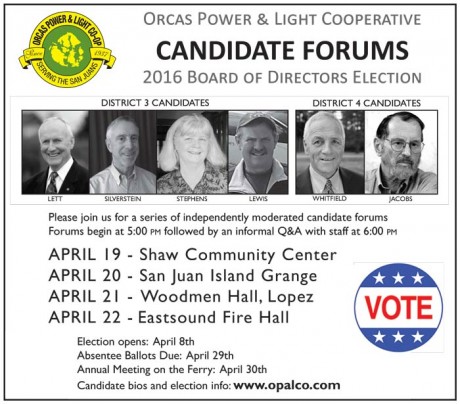 April 18, 2016 – Last Friday, OPALCO’s wholly-owned subsidiary, Rock Island Communications, sent an email to its customer list referencing a specific slate of candidates for OPALCO’s upcoming board election. Today, Gerry Lawlor, EVP of Rock Island issued a retraction of that email stating, “The opinions stated in that email are my own and were made without the knowledge of the OPALCO board, management team or Glenna Hall. I made an error in judgement.”

Foster Hildreth, General Manager for both OPALCO and Rock Island said, “OPALCO leadership takes a neutral position in the Co-op election. It’s up to the membership to decide who best represents their interests. We regret this misstep – it’s unacceptable.”

OPALCO Board members responded quickly with a call to create a clear policy on election neutrality, imposing sharp restrictions on campaigning. Discussion will begin at the April 21 board meeting on Lopez; the meeting begins at 8:15 am at the Fire Hall. OPALCO board meetings are open to co-op members. Board materials and meeting details are posted online at www.opalco.com.