Shakespeare Under the Stars 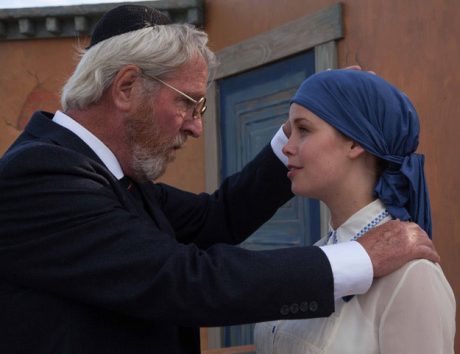 The show runs Thursdays-Sundays at 7:45 pm (a new time this year) on the outdoor stage at 1062 Wold Road.

Merchant is the story of the Jewish moneylender Shylock, who has been spat upon, cursed, beaten and cheated, for years —all because he is a Jew. But Shylock’s chief persecutor is suddenly in his power when a loan agreement that seemed like a joke at first goes on the rocks. The loan is interest-free, but a pound of flesh is due if the money isn’t paid back on time. It isn’t, and Shylock demands a savage enforcement of justice.

Director Helen Machin-Smth has transposed the setting of the play to Venice in 1938, under the Mussolini government.

“What I hope to do with this play is put everybody in Shylock’s position, imagining that their way of life, their religion and their traditions are constantly mocked, that their livelihood is being threatened and that they are sworn at and ridiculed on the street,” says Machin-Smith. “Just imagine what your reaction would be. I mean it’s as simple as that. We call it revenge — but it’s at the tail end of years and years and generations of abuse.”

It’s no wonder Shylock, badgered and bereft, turns on some young men taunting him and bursts out, “Hath not a Jew eyes? Hath not a Jew hands, organs, dimensions, senses, affections, passions? If you prick us do we not bleed? If you tickle us do we not laugh? If you poison us do we not die? And if you wrong us shall we not revenge?” His anguished fury hits home.

This being Shakespeare, the drama is leavened with comic relief in the form of a malaprop-spewing servant who helps Shylock’s daughter elope with a Christian, and some exotic suitors who come to vie for the wealthy heiress Portia. But she is won by a Venetian, and through him she comes to the aid of Shylock’s enemy in the gripping pound-of-flesh courtroom scene.

Prominent Seattle actors Keiko Green (Portia) and MJ Sieber (Bassanio, her lover) join ISL’s Daniel Mayes as Shylock in this new production. The merchant Antonio, who so recklessly signs away his own flesh, is played by veteran West Coast actor David Meyers.

This is a play for today. The powerful forces driving it could be drawn from the daily news — including the cross-dressing heroine’s brilliant yet merciless legal gambit against Shylock. The play’s most famous speech is hers: “The quality of mercy.” In a courtroom of angry men, she delivers a plea for humanity and generosity — which, however, are not extended to Shylock.

“Shakespeare’s characters are multidimensional and so are we. In every play, he has written his major characters with a multitude of negative personality traits and positive ones. They are real, complicated people, with all their foibles, prejudices, strengths — and love,” says Machin-Smith. The first time we meet Portia, early in the play, she admits that she’s very good at knowing what’s right to do — but not so good at actually doing it. “I want this show to leave the audience thinking, ‘Oh, that’s just like me’” says Machin-Smith, “both on the good side and on the bad side.”

Twenty-one years ago, husband and wife co-founders Daniel Mayes and Helen Machin-Machin-Smith left successful theater careers in Ashland and Seattle to create Island Stage Left, the San Juan Islands’ only professional theater company. They have stuck to their original commitment of producing professional-quality theater with no admission charged. Funding comes from voluntary contributions, and donations are greatly appreciated. (Without them, the company would vanish.)

Please note the new starting time this year: 7:45pm. Chairs are provided at the outdoor theater, but bring very warm clothes, sweaters, even blankets. It can get very cold as the sun goes down.