Good news from the Center for Whale Research… 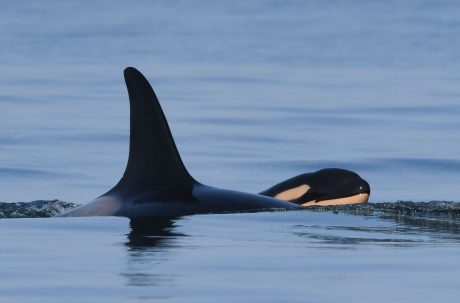 On Saturday, September 5, 2020, J pod was reported near the ODAS buoy off Dungeness Spit in the eastern Strait of Juan de Fuca in US waters. Another large group of the endangered Southern Resident killer whales was a few miles away near Race Rocks in Canadian waters swimming toward them. Hooray! At last, we might encounter a ‘superpod’ aggregation of J, K, and L pod whales in the inshore waters of the Salish Sea for the first time this year. So we launched three boats with researchers (two from San Juan Island and one from Victoria) to photo-identify every individual for a population census.

Usually, we have an accurate census of these charismatic Pacific Northwest ‘residents’ by July 1 each year. But this year, the salmon spawning migrations to the Fraser River have been so poor that the whales that must eat these salmon to survive have rarely come into what used to be their core summer habitat. A few small groups of these critically endangered whales have ventured inshore in July, and J pod in its entirety came to San Juan Island on September 1. J pod has remained in the general area since then; but, the last time we had some members from all pods was on January 25! 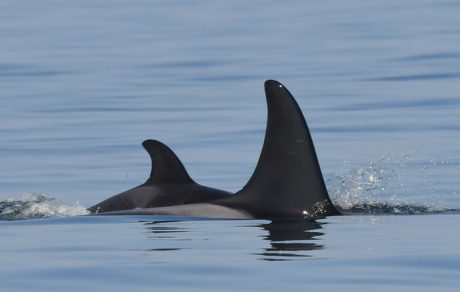 We have had comprehensive encounters with J pod in Haro Strait on September 1 and 3, 2020, at which times we monitored pregnant females J35 and J41 very carefully and saw that they had not yet given birth. On September 5, we followed up on a report from one of the PWWA whalewatchers that a very small calf was seen. Our researchers, Dave Ellifrit and Katie Jones, accompanied by guest veterinarian Dr. Sarah Bahan, quickly identified the mother as J35, Tahlequah.

She made world news in the summer of 2018 when she carried her dead calf on her head for 17 days while the pod traveled about 1,000 miles around the Salish Sea on what we termed a “Tour of Grief.” She was still capable of producing a live calf after an approximate eighteen-month gestation! Hooray! Her new calf appeared healthy and precocious, swimming vigorously alongside its mother in its second day of free-swimming life.

We know that it was not born today because its dorsal fin was upright, and we know that it takes a day or two to straighten after being bent over in the womb, so we assign its birthday as September 4, 2020. (Ergo gestation commenced in February 2019). Tahlequah was mostly separate from the other whales and being very evasive as she crossed the border into Canada, so we ended our encounter with her after a few minutes and wished them well on their way. 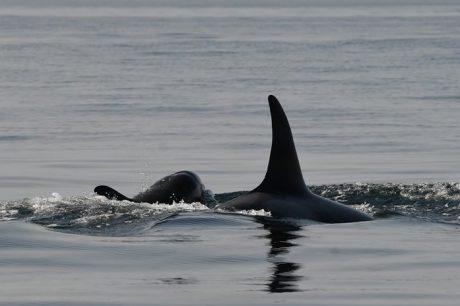 We hope this calf is a success story. Regrettably, with the whales having so much nutritional stress in recent years, a large percentage of pregnancies fail, and there is about a 40% mortality for young calves.

​With this new calf in J pod, that we designate as J57, the SRKW population now numbers 73, although the official number for July 1 is estimated to be 72. We have to sort through all of the photos to see which whales were alive yesterday, and it follows that they would have been alive on July 1. The July census is used for consistency in comparison with the Northern Resident killer whale (NRKW) population monitored by DFO Canada. 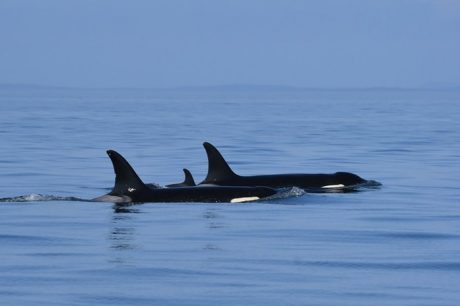 Link to: Center for Whale Research