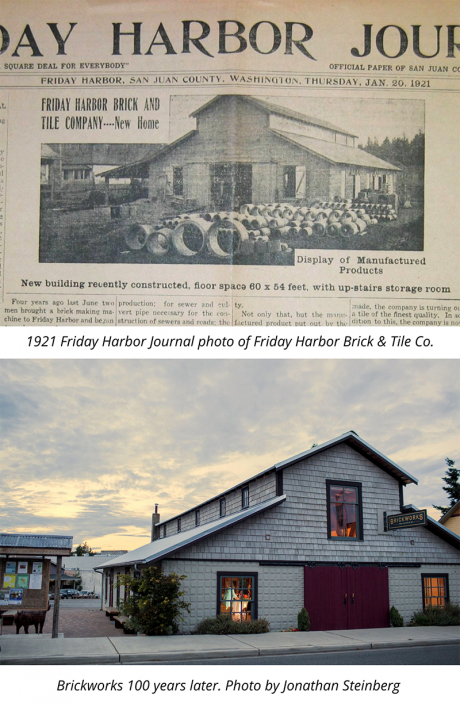 It seems like only a few years ago that the San Juan Islands Agricultural Guild threw a grand opening party for our community’s beloved Brickworks building and plaza, but in fact, the original historic building is celebrating its 100th birthday this year.

May is “History Lives Here” month and the perfect time to celebrate this Friday Harbor building’s big birthday with a trip back in time.

The original “Brickworks” building was completed in 1921 by concrete contractor T.T. Paxson, as the new home of Friday Harbor Brick and Tile Co.(FHB&T Co.) and was constructed featuring its own products: concrete blocks, bricks, and tiles.

Following a disastrous downtown fire in 1925, a new Friday Harbor ordinance was signed, requiring new buildings to be built of fireproof materials: brick, stone, or concrete.

FHB&T Co. would go on to supply concrete building blocks and bricks for many town businesses and buildings in the years to come, including the town hall.

Concrete block construction was a popular “cheap, quick, and easy” building material typical of the early 20th century. Two people could produce 80-100 blocks per day. Machines with adjustable cores and molds allowed for the manufacturing of a wide variety of sizes and styles.

The building later became known as the Boede Building, after Paxson’s son-in-law and partner, John H. Boede, Jr., took over the concrete block business. When block, brick and tile production ended, several businesses – as well as an upstairs residence – were housed in the building, including Friday Harbor Electric.

In 2008, the San Juan Islands Agricultural Guild nonprofit was formed and identified the development of a permanent farmers market facility on San Juan Island as its first project.

After considering several sites, the historic brick and tile building at 150 Nichols Street was chosen. With help from a state grant and generous community donations, the Ag Guild purchased the site from then owners, Joanie and Bill Erickson.

The Ag Guild named the property “Brickworks,” to honor its history. A community grassroots fundraising campaign, as well as a grant from the Town of Friday Harbor, and thousands of volunteer hours led to the eventual renovation of the building and construction of the plaza.

Today Brickworks is not only a year-round home for the San Juan Island Farmers Market, but serves as a gathering place for community gatherings, meetings, and special events like weddings and parties.

If you’d like to be part of the next 100 years of Brickworks history, consider purchasing an engraved brick to join the hundreds of others already installed on the plaza.

Special thanks to Sandy Strehlou at the Town of Friday Harbor and Boyd Pratt for their historical knowledge and photos for this article.