What the Gull? News from Wolf Hollow 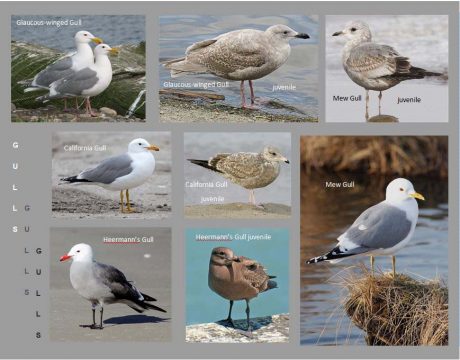 You can see thousands of gulls on the shore or in the water around the San Juans right now. It would be easy to dismiss them as “just a bunch of seagulls”, but next time you see a flock of gulls, take a closer look. Are there different sizes of gulls? Do they have different colored wingtips or legs?

In our area, many of the gulls are Glaucous-winged Gulls. These large gulls with pale grey and white wingtips and pink legs, raise their youngsters on the islands and are here year-round. However, in late summer and into fall, other types of gulls arrive as they move from their breeding grounds out to the coast for the winter.

Look for California Gulls with black wingtips and yellow legs, Heermann’s Gulls with dark bodies, pale heads and red bills, and small Mew Gulls with yellow bills and legs. Don’t be fooled by the darker, mottled, brown, juvenile gulls that can be really challenging to identify.